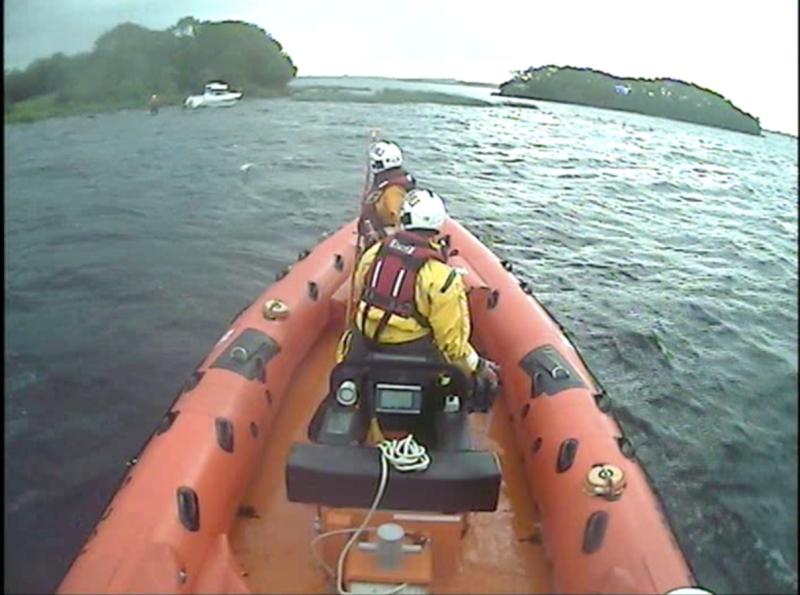 Lough Derg RNLI has rescued a man who was stranded overnight on a drifting cruiser because he was reluctant to call for help.

At 8.50am this Friday, July 28, Valentia Coast Guard requested Lough Derg RNLI to investigate a report from a passing cruiser of a vessel, thought to have slipped its moorings, aground behind Hare Island.

A man was subsequently found onboard by lifeboat crew, who discovered he had spent the night alone and stranded on the lake, as he was reluctant to call for help.

At 9.15am the lifeboat crew located the 16ft cruiser in Church Bay, behind Hare Island on the Clare shore. Church Bay is known for particular hazards - sudden shallows and rocks.

The lifeboat proceeded with caution and when sufficiently close the cruiser, an RNLI volunteer waded in to the vessel to determine whether there was anyone on board, and to secure the vessel.

On inspection the RNLI volunteer found one person on board below, asleep in the cabin. The person was safe and unharmed and wearing his lifejacket.

He had been stranded on his boat since 8pm the previous evening, but had been reluctant to call the rescue services, anxious not to put anyone out.

The winds overnight on Lough Derg were westerly, Force 5, gusting 7.

At 9.45am the lifeboat had the vessel off and the rocks and taken under tow, with the skipper and an RNLI crew member on board to Garrykennedy harbour. The vessel was safely tied up alongside at 10.5am.

Eleanor Hooker, helm at Lough Derg RNLI, said: "No callout is routine. Our training and experience tells us to expect the unexpected.

"We approached what we thought was an empty vessel which had slipped its moorings and found a person on board who had spent the night alone, stranded in stormy conditions, and without help coming for them.

"The RNLI are there to answer any call for help. No lifeboat launch is ever a waste of our time or resources."

Pat Garland, deputy launching authority at Lough Derg RNLI Lifeboat Station added: "I would urge all boat users, when in difficulty to call 999 or 112 and ask for the Coast Guard.

"RNLI lifeboats are launched at the request of the Irish Coast Guard, who then make the correct call on which search and rescue assets to deploy to the scene.

"We would urge the public not to delay calling for help. This could have had a very different outcome."