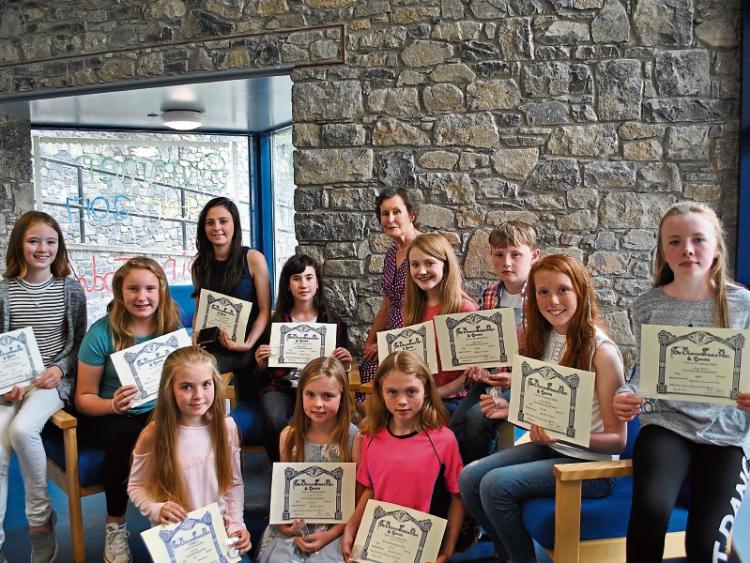 Speaking to students and parents of medal winners at this year’s Speech and Drama and Effective Communication Exams awarded by the Leinster School of Music and Drama, recently retired teacher Eleanor Dwyer paid tribute to the many parents who entrusted their children to her during her years in Cashel and surrounding districts.

Eleanor acknowledged also the Parents’ Associations and teachers in the schools in which she taught and the examiners whose comments were always helpful and supportive of the students. Sharing her love of good clear expressive speech and opening the world of drama and literature to the students was a privilege and she sincerely thanked them for the many enjoyable hours they shared.

Even the shyest child blossomed and all learned to work co-operatively, develop vocal and listening skills and become more at ease with self. To have been a part of their lives was indeed an honour. Meeting them in later years and seeing what fine adults they have become is always a pleasure, she said and in more recent years having some of their children as students was gratifying.

An interest in English Literature, and subsequent study at the Leinster School of Music and Drama, was the catalyst for her work both as a private Speech and Drama teacher and giving classes and putting on stage productions in primary schools in the Cashel catchment area, said Eleanor. Being able to pursue her love in this sphere and imbue that love in young minds was very rewarding.

Communication, the ability to convey information in a clear and concise manner, is regarded as one of the key life skills required nowadays.

However, speaking in public is frequently cited as one of the most dreaded fears! An early grounding in good communications skills is therefore worthwhile.

Imparting a knowledge of effective communication was an integral part in her teaching practice – for younger children through storytelling, speech making and debating. For older students, speech construction and development, research, use of aids to enhance content and delivery and an appreciation of the purpose of a talk be it to inform, appeal, motivate, entertain or acknowledge.

In reflecting on the changes that have occurred in her practice, Eleanor stated that in her early years greater emphasis was placed on voice production, diction and expression, mainly through poetry – both solo and choral - and reading aloud. Public speaking and drama was only for senior grade students.

In more recent years, this has changed to a study of all forms of communication. From quite a young age children are introduced to solo drama performance, mime, improvisation, storytelling, drama games, debating, platform procedure, poetry, prose and reading skills.

In addition drama is frequently used as an educational tool to bring other subjects such as history to life - children ‘live’ in roles and make meaning. For older students, an in-depth study of character in dramatic selections, comparative styles of writing and the history of drama is studied.

Playwrights and poets play an important role in asking us to reflect on and explore social issues, moral dilemmas or cope with situations that arise in the life of humans.

Taking exams through the Leinster School of Music and Drama was an early introduction to help students overcome nerves and learn coping mechanisms as well as achieving a standard and progression said Eleanor.

Speech and Drama is a specialised study which is becoming even more valuable for students with a much greater emphasis on presentation skills in the revised Junior Certificate Curriculum. Eleanor is happy to say that classes in Speech and Drama will continue in the Parish Centre, Friar Street from September with Nancy Farrell who is an enthusiastic, experience teacher currently teaching in the Lisronagh and Rathkeevan areas.