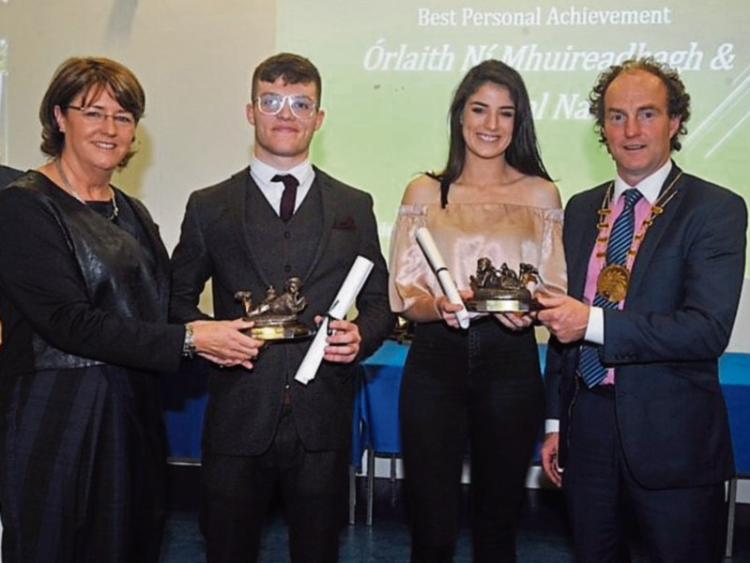 The awards ceremony is held annually to acknowledge the outstanding achievements of the students who attended the post primary schools under the remit of the Tipperary E.T.B. Students are presented with an award and a certificate under the following categories: Best Leaving Certificate, Best Leaving Certificate Applied, Personal Achievement and Best Sporting Achievement. The awards are in recognition of the efforts of students, teachers and schools to achieve continuous improvements and excellence in their academic studies and personal development.

Laura Walsh received the award for Best Leaving Certificate Applied Student from Coláiste Phobal Ros Cré. Laura commenced her education at Colaiste Phobal in September 2012. From the onset she proved to be a dedicated student who worked hard to reach her potential. She displayed an excellent work ethic, being consistent in her studies and always meeting deadlines.

The Leaving Certificate Applied programme provided many opportunities for Laura to demonstrate her leadership capabilities through her active role on the Student Council.

Throughout her years in Coláiste Phobal Ros Cré Laura was an absolute credit to her mother Caroline, the school and indeed herself.

Abigel Nagy received the award for Best Leaving Certificate. Abigel started in Coláiste Phobal Ros Cré in September 2011. From the outset Abigel committed herself to her studies. She displayed diligence in everything she did and expected standards for herself, but was always modest about her achievements. Words like kindness, empathy, strength, good humour could all be used to describe Abigel. Abigel faced life every morning with a smile and teachers concur that “she was a delightful student to teach”.

William Cummins received the award for Best Sporting Achievement. During William’s six years in Coláiste Phobal he excelled in many areas with one of note being his badminton abilities. William started in first year as a beginner but improved at a rate of knots winning county titles for the Coláiste at the various age groups. William was part of the division 1 All Ireland runners up team of 2015, in 2016 he was a member of the victorious All Ireland team and runner up again in 2017.

On top of that success at club level William has gone from strength to strength working his way up through the ranks winning numerous singles, doubles and mixed titles.

When the idea for a positive mental health week was rooted for January 2017 Cathal and Órlaith rose quickly and undertook pivotal leadership roles. Órlaith and Cathal chaired the weekly meetings as well as planning, organising and undertaking the administration work from September onwards. It was Cathal’s and Órlaith’s leadership throughout the week that impressed everyone in Coláiste Phobal. Congratulations to Abigel, Cathal, Laura, Órlaith and William on your awards. Everyone in Coláiste Phobal Ros Cré is very proud of all your achievements.