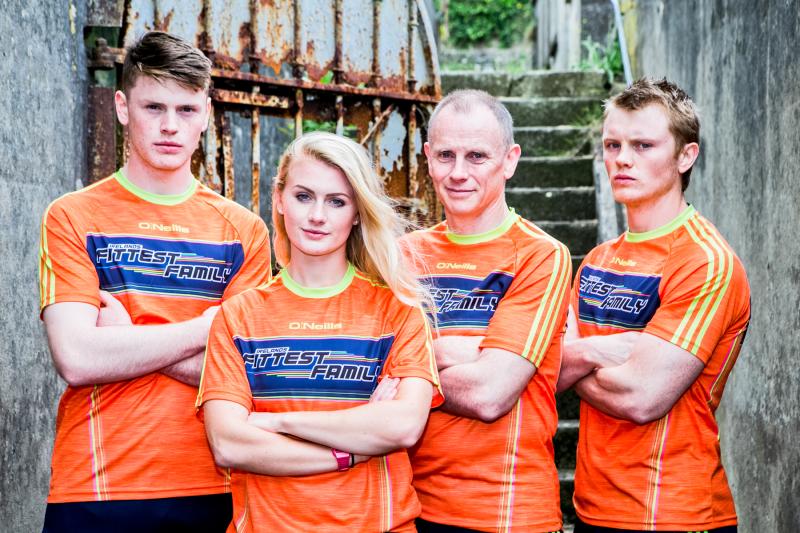 The Meagher family from Killenaule are hoping to follow in the footsteps of last year's Fittest Family winners the Cummins as they take on the Ireland’s Fittest Family challenege in a new series starting this October on RTÉ One.

Liam Meagher Snr (54), his daughter Ailshe (23) and his two sons Joe (25) and Liam Jr (19) will be up against five other families in the gruelling tunnel challenge in episode one of series five.

New tougher locations have been added to the series, which tests all aspects of fitness, starting with Camden Fort Meagher in Crosshaven Co. Cork. Dark damp underground tunnels terrify the families in the very first event, and it doesn’t get any easier in the eliminator, which the coaches believe to be the toughest course ever featured on the series.

Performance consultant and referee Joe O’Connor said: “Each year the stakes get higher, and this year definitely presents the toughest physical challenges that we have seen to date. Some Fittest Family hero events like Hanging Tough will return, but new events which see the families tested in ways we haven’t seen before will feature in every episode.”

Liam Snr (54) is a GP in his local area. He is also the doctor for the local GAA club, trained the ladies football team for years, and watches as much matches as he has time for.

In his spare time he cycles, rows, runs, swims and plays 5-a-side soccer. In his youth he played club gaelic football, university gaelic football and tennis in Castlebar, Co. Mayo. He did the Gaelforce adventure race for his 50th birthday and did a triathalon in May. The kids describe their Dad as very calm and collected, nothing can bother him!

Joe (25) is a pHD student in Statistics in University of Warwickshire and is an intercounty hurler for Warwickshire. He plays hurling and Gaelic football for Coventry and competes in British University power lifting competitions. He used to play rugby for Rockwell secondary school.

Ailshe (23) is a fourth year medical student in Trinity College Dublin. She is a senior rower for Trinity Ladies Boat Club and used to compete in athletics and Gaelic Football. Ailshe has a never give up attitude. She trains 10 times a week for the college and doesn’t think she’ll be the weakest link in her family.

Liam Jr (19) is a first year Engineering student in UCC. He plays for the fresher hurling team and plays club senior hurling, and under 21. Liam captained the club minor Gaelic football team last year to win a south final.

How far will the Meaghers make it in this series of Ireland’s Fittest Family? Tune in to RTÉ One Sundays at 6.30pm to find out. Ireland's Fittest Family starts on Sunday 29 October at 6.30pm on RTE1.