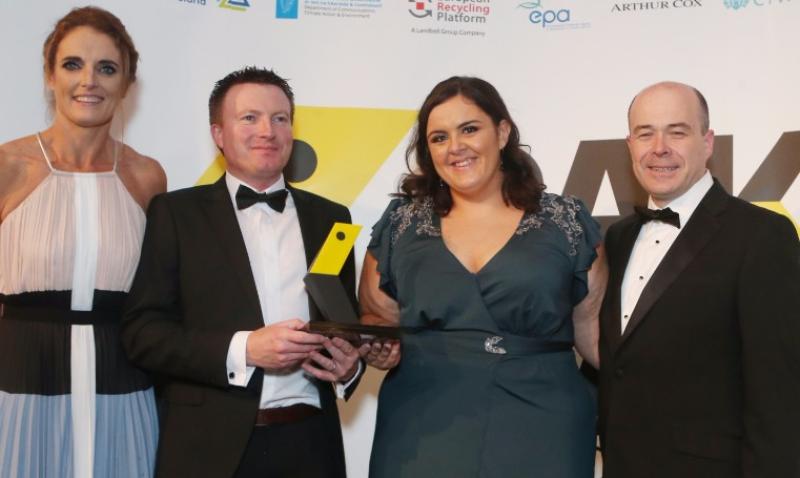 The leading provider of waste management solutions in the Mid-West claimed the 2017 Household Waste Collector of The Year award, sponsored by the Irish Waste Management Association, at the annual Pakman Awards in Dublin.

Over 400 representatives from across the country gathered for the Repak sponsored event at the InterContinental Hotel Dublin, with Clean Ireland Recycling beating off opposition from across the country to claim the prestigious title. It follows similar successes at awards in 2012, 2013 and 2014, making Clean Ireland Recycling consistently Ireland’s leading household waste collector.

Speaking after receiving the award, Brian Lyons of Clean Ireland Recycling, said: “We’re thrilled with this award. For a company based here in the Mid-West to be competing and recognised at a national level says a lot about what we do. It showcases our staff and their dedication and the level of service provided to each customer.”

“From the origins of the company back in the early ‘90s, Clean Ireland Recycling have always pushed the boundaries in terms of standards and this proves it. We have, as the name suggests, pushed the green agenda by always looking to introduce cleaner, greener technologies and have, without question, pioneered in this regard.”

Clean Ireland Recycling – a recent sponsor of the Tipperary hurling and football championships - were the first to introduce the 360ltr recycling bin as standard to householders, allowing for increased recycling levels. They were the first company in Europe to introduce trucks with four compartments for all the different types of waste material, meaning less trips and lower carbon emissions. They have now introduced the first dedicated Compressed Natural Gas (CNG) waste collection trucks into Ireland, which again will lead to lower emissions.

“No other operator in the country is as dedicated to the environment as this and we can manage to do it at very competitive rates. It just shows that environmentally friendly solutions don’t have to cost more.”

The Pakman Awards seek to recognise complete excellence in the environmental approach taken by a business, organisation or community group in all aspects of their operations. The Pakman judging panel was looking for measurable impacts across all elements of the waste hierarchy. Reuse, reduction, recycling and waste minimisation alongside environmental management of food, water, energy and biodiversity.