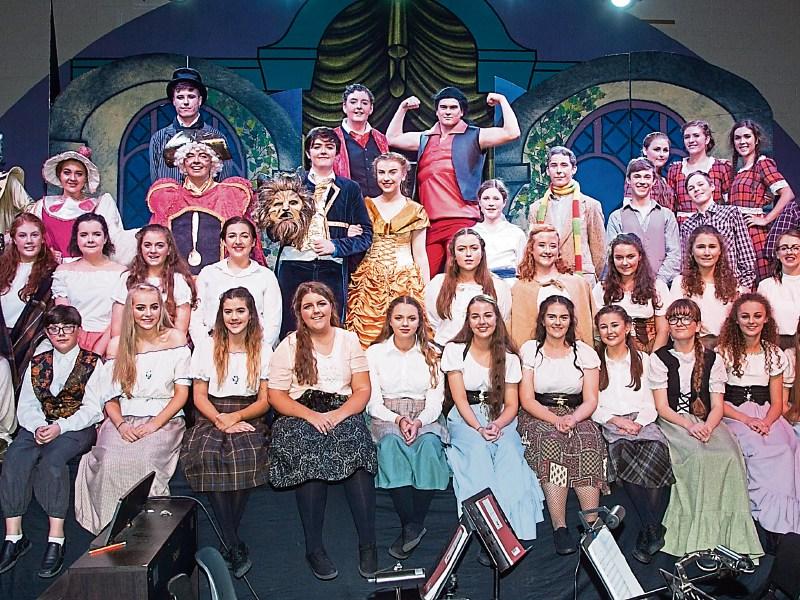 Cashel Community School’s recent production of ‘Beauty and the Beast’ sold out all six performances and those lucky enough to see it enjoyed a wonderful night’s entertainment.

Belle was brought to life by Rachel O’Carroll, a veteran of three previous musicals. Her performance was distinguished by the poise and polish of a princess-in-waiting.

Rachel clearly relished the opportunity to showcase her vocal and acting talent. The number of little Belles, clad in their princess dresses clamouring to have their photo taken with her was a testament to the sheer delight she brought to the part.

Donnacha O’Dwyer was Beast. Being Beast requires the actor to wear cumbersome paws, claws and a mighty mask. It would be all too easy to rely on clichés, stomping and roaring but this performance was truly revelatory. Donnacha was a vulnerable, compelling Beast.

This young man animated the character beautifully in a subtle, nuanced performance that will long be remembered. Gaston offers so much comedic potential and Adam Skeffington exploited every ounce of it.

He relished every moment on stage, delivering a marvellous performance which showcased his voice perfectly. Jack Ryan was Maurice, Belle’s hapless father.

He engaged us with a sympathetic and self-deprecating interpretation which evoked laughter, pity and relief.

Le Fou is the fool of the piece. Richie Crowe is a very perceptive young actor blessed with a wonderful voice and he did poor Le Fou great justice. As ever his was a very accomplished performance, great stage presence and marvellous timing.

‘Tale As Old As Time’ is sung by Mrs. Potts and Marianne Ryan delivered a strong performance, ably supported by three First year students (Éire Morrissey, Gráinne O’Connor and Ross Walsh) who alternated in the role of Chip.

James O’Sullivan’s Lumière shone brightly and Ciarán McKenna was a charming, engaging Cogsworth. Babette is essentially a vivacious flirt and Clodagh Ryan exploited every ounce of coquetteishness in a very charming performance. The ‘Silly Girls’ were hugely enjoyable as portrayed by Aoife Linehan, Aoife O’Connor and Ashleigh Myles. Shona Fitzgerald made the most of Madame de la Grande Bouche and Eoin Foley was a sympathetic bookseller.

Ben Keating was Monsieur D’Arque. It was his first time treading the boards but his nascent talent was clearly apparent. A great voice lent appropriate gravity to D’Arque’s villainous machinations.

This is a mammoth show to produce and those involved backstage deserve particular praise for the seamless synchronicity with which scenes changed and props were managed.

The set itself was a triumph, built by Seamus Murphy, it was designed by Mr. Andrew Fox and his TY Art students. Costumes and make-up were excellent, overseen as always by Tracey Gibson, Marie White, Lisa Sutton and Caroline Power. The many dance numbers were expertly choreographed by Miriam Ball.

The production team of John Murray, Nicola Sheils and Lianne Bradley is to be commended on a truly marvellous show. Next year’s show, the school’s 25th is already hotly anticipated.