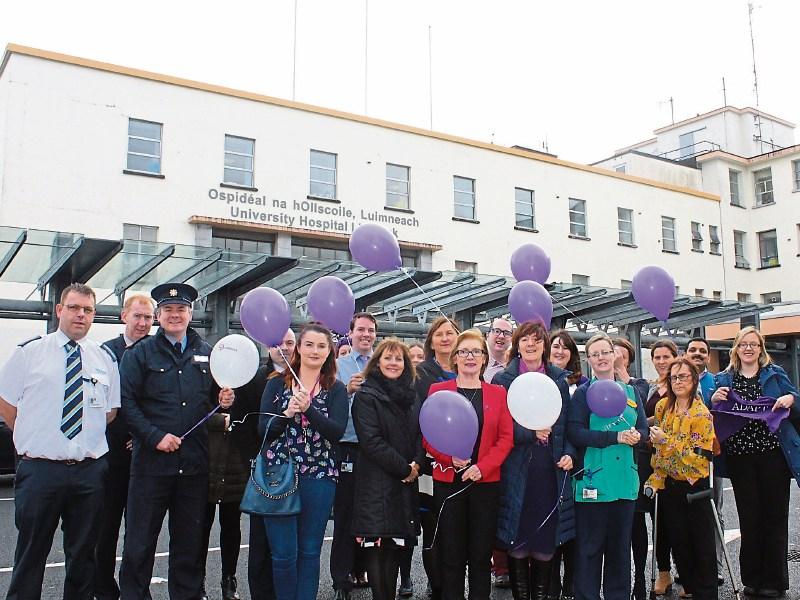 UL Hospitals Group staff are joined in marking 16 Days of Action on Violence Against Women by Deputy Jan O’Sullivan, Adapt House, Clare Haven, Limerick gardai and other partners at UHL

Staff at Nenagh Hospital have joined forces with their colleagues in Limerick to take part the campaign, 16 Days of Action on Violence against Women.

The annual campaign was launched this Monday at University Hospital Limerick by Labour's Deputy Jan O'Sullivan.

The Nenagh staff will be joined on the international campaign by An Gardai Siochana, Adapt House, Clare Haven, Ascend Services in County Tipperary and Midwets Rape Crisis Centre.

From November 25 to December 10, organisations in the Mid-West are running a range of activities to raise awareness about issues of domestic, sexual and gender-based violence.

As part of the campaign, the Medical Social Work (MSW) Team at UL Hospitals invited staff, partner organisations and members of the public to their annual event at UHL.

The MSW team offer a confidential, support and information service to those who are affected by domestic violence across all the UL Hospitals Group. They meet and work with women, children & families who attend our hospitals having experienced or who are at risk of abuse.

Anne Hegarty, manager of Medical Social Work Services at UHL, said it was important “to look at this year’s campaign theme, Change the Conversation, which puts a focus on how we discuss and speak about domestic violence and femicide. The campaign highlights myths surrounding domestic violence and challenges these.”

Deputy O’Sullivan commented: “The hospital is an absolutely key location for this campaign and I am delighted to support UL Hospitals in getting the message out that domestic violence is totally unacceptable and that for anybody who is in a situation where it is an issue for them, that they should feel safe to come forward; that the services and support are there. The crucial issue is raising awareness and I want to congratulate the hospital and all the partners here today in doing just that.”