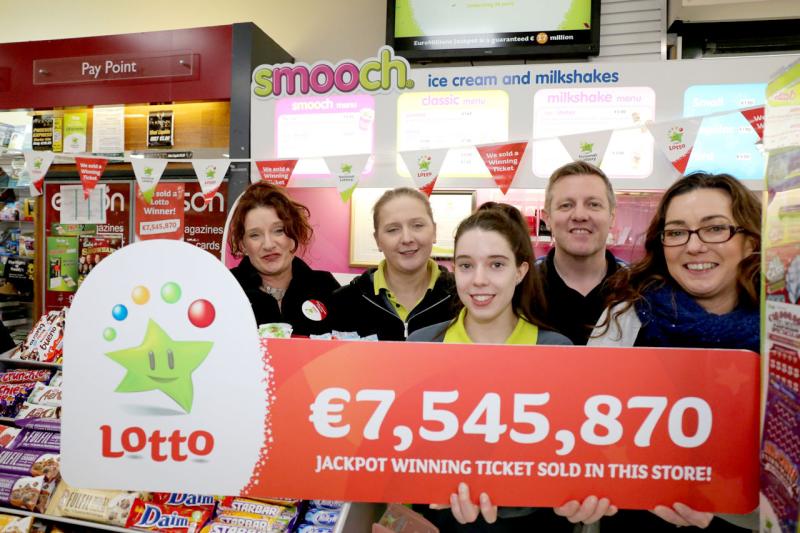 The Tipperary Lotto syndicate, who scooped a major €7.5m win earlier this month, have finally come forward to claim their cheque this morning at National Lottery HQ in Dublin.

At the cheque presentation this morning a member of the winning syndicate, which scooped a mega €7,545,870 lotto jackpot, revealed she got such a shock when she realised the win she put the lucky ticket inside a book for several days before telling anybody.

The stunned woman carried on as normal for five days before she plucked up the courage to go the bookcase to get the tickets to verify that she, and her group of friends, were actually to become millionaires!

However the syndicate member - who claimed the prize today on behalf of the other members of the group - revealed they have yet to tell their families about their new found fortune.

Speaking on what the syndicate plan to do with their winnings she said: “We are all in the same frame of mind and the same age,  and we want this lucky windfall to be a legacy for our families to last for future generations. We have yet to tell our families about the win but we will do so in the future when the time is right. We all have children, some of us have grandchildren, who work hard at what they all do so we don’t want this to be a distraction for them. However we will look after them all in time. We are just so grateful to have this bit of luck fall on us”.

The members of the syndicate, which has been together for six years, take it in turns to buy their Lotto tickets. They bought their winning Quick Pick ticket at the Eason’s store in Thurles Shopping Centre, Co. Tipperary the day before the draw.