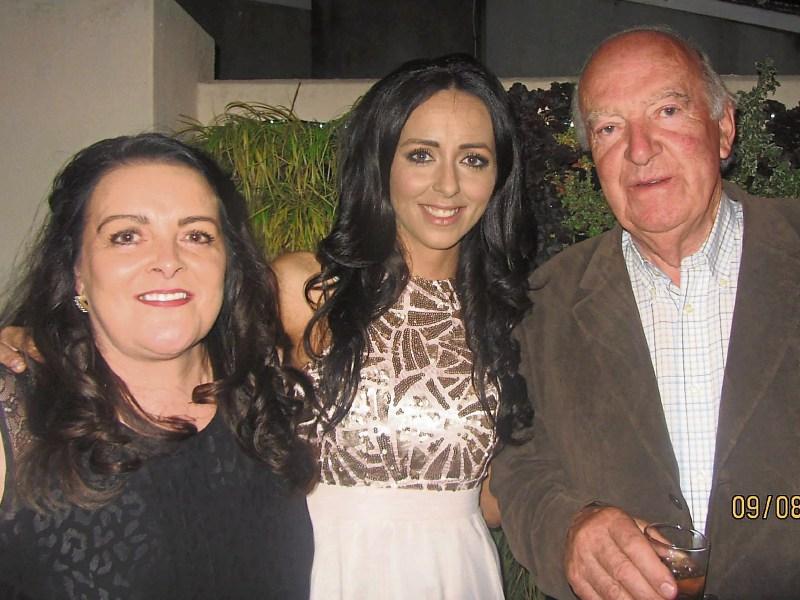 the late Marion Kelly with her daughter Aideen and father Ned

The father of Tipperary mother Marion Kelly, has said that words cannot express the sense of loss her death has brought to the family.

Grandmother Marion, 52, from Nenagh and who lived in Puckaun, died in University Hospital Limerick on Friday week last just six weeks after a long-running trial of the CSL Behring manufactured drug, Respreeza, which she had been on for 11 years and credited with turning her life around, ended.

She had been suffering from a genetic condition, Alpha-1 Antitrypsin Deficiency, which can cause severe lung and liver problems.

“Marion could and should have had more time with her family. Respreeza was her lifeline and she would say that on Mondays before her infusion on Tuesdays, her body would know that she needed it,” her dad Ned said this week.

“Marion’s health had deteriorated since her last infusion of Respreeza seven weeks ago.

“She was still in good form and spent a lot of her energy campaigning with the rest of the Alpha-1 family.

“The week before last she was admitted to hospital on Tuesday.

“She herself thought it was only a short stay and would be home within days but sadly it was too much for her this time and she passed away on the Friday.

“It is a complete shock to the family,” he said.

Mr Kelly recalled that Marion had been to Limerick two weeks ago to do her Christmas shopping.

“She really loved this time of the year. Sadly she won’t get to give her presents out this Christmas,” he said.

The devasted father said that no one should have to witness a loved one struggle to stay alive the way his family did.

“To watch a person generally so strong suffer so much in her final hours was devastating. To watch a 32-year-old daughter being told her mother is going to die and then to see her hold her mother for hours giving her peace and comfort while she drew her last breaths, is just too much,” said Mr Kelly

Meanwhile, the family has called for a face-to-face meeting with Minister for Health Simon Harris to get reassurances that no other patient would be put in the same position.

“The Minister spoke openly in the Dail when questioned about my mam’s death by Deputy Alan Kelly but we want him to translate that into a commitment that he will do whatever is necessary to ensure no patient again has to die unnecessarily because of the drug being taken away from them,” said Marion's daughter Aideen.

She sad that while the drug company was “unquestionably charging exorbitant amounts” for this drug, there was a six-month free supply available and the HSE failed to act.

“My mother’s faith was sealed because of that,” she said.

Ms Kelly said that what the family now wanted was for the HSE to honour the commitment to administer the drug for the six months.

“We want the Minister to direct the HSE to get into meaningful talks with the drug company and find a solution so that this drug, which is licensed across Europe, is available beyond the six months.”

“Marion was a grandmother, daughter, sister and friend to many, but to me she was a very precious mother. She worked so hard to provide for me, opening her own hair salon and working day and night to make it a success until she fell ill in her mid-thirties,” said Aideen.

“In April 2016 mam made it her mission to walk me up the aisle for my wedding. This is something that she would have not been able to do in years previous. It meant the world to me that she could do this and it’s a memory I will treasure forever,” said Aideen.

While her mother’s passing had been devastating she was indebted to many people who have been with her mother and her family on this journey.

“I would like to thank everyone who has supported my mother, including the team at University Hospital, Limerick, as well as those in Beaumont Hospital, Nenagh and Limerick hospitals and all carers who came to her home,” she said.

She also thanked the other Alpha-1 patients for their support and friendship and asked them to have the courage to continue their fight.

She assured them they will be there with them every step of the way, “as my mother will be in spirit”.

“ We owe it to her to make sure we do all we can so that this trial is finally approved here like elsewhere and that my mother’s friends among the Alpha-1 group can continue to breathe and live easier once more,” said Aideen.