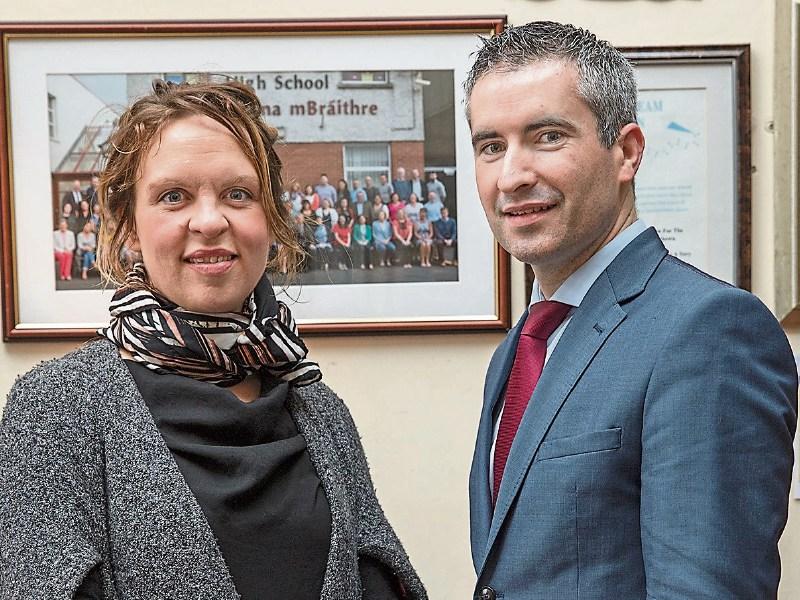 Two new vice-principals at Clonmel High School, Amy Walsh and Anthony Reynolds, have settled into their roles since they started in September.

The expansion in numbers attending Clonmel High School has seen the appointment of two vice-principals for the first time in the history of the school.

The two new additions to the teaching staff, Anthony Reynolds and Amy Walsh, have been settling into their vice-principal roles since the start of the academic year.

The vice-principal duo hail from the West of Ireland. They have been made feel very welcome by staff and students and are delighted to be part of the team tasked with enhancing the development of the school.

“The school has gone over 700 pupils so we were allowed appoint two vice-principals and it was great they came at the same time to carve out their roles. They are a great addition to the school and had to hit the ground running because of their involvement in school evaluation in October, which was an outstanding success " said Karen Steenson,Principal.

The principal  also paid tribute to the retired vice- principal Gerry Shanahan who kindly acted as a mentor to the two new vice-principals.

Anthony Reynolds is a native of County Leitrim and lives in Kilkenny with his wife Orla, three year-old daughter Molly and ten month-old son Sean.

His fourteen-year teaching career has brought him to England, Tallaght and Heywood Community School, Ballinakill, Abbeyleix.

It is his first experience of an all-boys school and he has taken on a pastoral role for the senior cycle students, among other duties.

Anthony is keen to play an influential role in the development of  the IT and sporting facilities at the school.

He would like to see the school incorporate more e-learning and believes there is scope to enhance the sporting facilities.

Among his objectives would be an all-weather astro-turf facility.

“I think such a facility is crucial and there is no reason why the High School, with the support of the community, cannot lead the way on such a project” said Anthony, who has a Gaelic football and basketball background.

Amy Walsh  is a native of Roscommon and lives with her husband Phillip and their sixteen month-old son Maurice in Clonea Power.

She began her career at the Presentation in Thurles, where she spent thirteen years teaching English and Religion.

Amy, an All-Ireland handball winner, then moved to a national post working with the professional development support service for teachers with responsibility at national level for the co-ordination for the Leaving Certificate Applied programme, senior English literacy programme and school self-evaluation.

Amy is happy to be back working in the school environment.

Among her duties at the school is the implementation of the changes to the Junior Cert.

“It is an ongoing process and new to teachers and the students who are becoming accustomed to the new element of the value of their input into new  areas of learning, which gives recognition to their overall contribution “ said Amy.