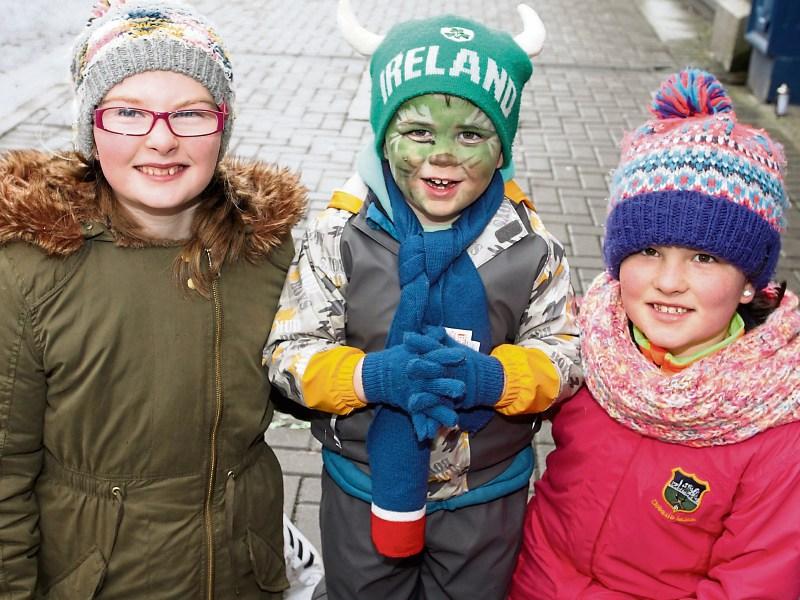 Emer, Ruairí and Aileen Moroney from Templederry, at the St Patrick's Day parade in Nenagh

Nenagh's St Patrick's Day festival suffered a double whammy this year with the atrocious weather that hit the Premier County over the festival weekend.

The parade committee, chaired by Cllr Hughie McGrath, had agreed to postpone the parade by one day following the devastation that Storm Emma brought to traders and businesses in the town at the start of the month.

Then, last weekend's snow and biting wind forced many of the annual headline participants to cancel their appearance.

Nevertheless, a hardy group of several hundred lined Pearse Street and Kenyon Street for the parade, which kicked off at 2pm on March 18.

Led by St Patrick himself and the Tipperary Fire and Rescue Services with their sirens blaring, the spectators were treated to a blaze of colour.

As is traditional, Nenagh ONE took the salute at the viewing stand at Market Cross, where councillors, council officials and other dignitaries huddled from the swirling snow.

With local dancing schools and St Mary's Convent Primary school band opting to stay indoors, the parade obviously lost some of its glamour.

But the hardy lads and lasses of Nenagh Ormond RFC and Nenagh Eire Og Juvenile Club, as well as Nenagh Scouts, proudly marched, along with Lahorna Handball Club and Nenagh Special Olympics

Lough Derg Search and Rescue took the opportunity to pelt parade watchers with snow as they paraded along the route.

The Charles Kickham Brass and Reed Band braved the conditions, travelling from Tipperary Town at the last minute to take part in the parade.

Among the trade floats were Abbey Machinery and Fogarty Concrete, while bringing up the rear were members of the Eagle Knights Ireland Motorcycle Club.

Hopefully, the parade will return to its normal slot on March 17 in 2019.