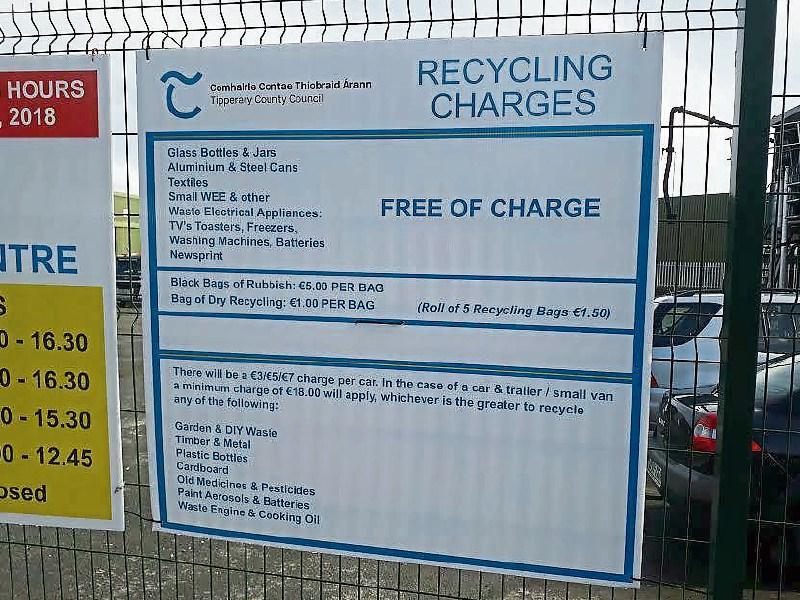 People in the Nenagh area are facing charges for some of the waste that they dispose of at Tipperary County Council's recycling facility in the town.

There would appear to be some confusion about how the new charges will operate for those who bring small quantities of waste to the centre at Limerick Road.

The issue was raised by Cllr Hughie McGrath at Nenagh Municipal District Council.

Marion O'Neill of Tipperary County Council's environment section confirmed to the Tipperary Star that charges will be brought in for certain items from Tuesday, April 3.

She said people will be able to bring black bags of domestic rubbish to the centre for €5, and a charge of €1 per bag for dry recycleable goods.

In the case of a car and trailer or small van, the mimnimum charge will be €18, whichever is the greater to recycle.

Ms O'Neill said that people who use the facility had been made aware of the impending charges through signage and information leaflets.

However, she felt staff at the site would use their discretion when it came to charging.

The council runs recycling units in Roscrea, Cashel, Donohill and Clonmel, where charges are already in place.

These charges increased last April, when the council announced increases due to an increase in the operating costs of these centres. The cost of disposing of black bag waste, bulky items, plaster board and mattresses has increased as has the cost of dry recycling bags. Other operational costs have also increased, for example, diesel, the council says on its website.

Ms O'Neill said that the council was bringing charges in Nenagh into line with charges at its other sites and the aim was to upgrade the facility to have all five sites at the same standard.

Many every day items will still remain free-of-charge at the facility, including glass, steel and aluminium cans, textiles, newspapers / newsprint, magazines, batteries ushc as AA, AAA, Cell C, Cell D and PP3; waste eletrical items that have a plug or battery and flourescent tubes.

Nenagh Sinn Fein member Damian O'Donoghue said he had raised the issue and local concerns over the proposal back in February with Tipperary County Council and was told the recycling service would remain free and people could continue to bring the likes of plastic bottles, cardboard, textiles and WEEE to the centre without charge.

“However, last week I received a phone call from a local man who had just visited the centre. He informed me that from April 3 there will be a charge for recycling certain items. I was genuinely surprised to hear this, given the clarification I had received from the council,” he said.

“Users of this excellent facility are not happy about this. It seems to me that local concerns about this charge were not listened to and another unwanted charge has been added to people's already high living expenses” he said.

Mr O'Donoghue warned that this will also lead to more illegal dumping and the effects of this will be seen on river banks and in ditches across North Tipperary.