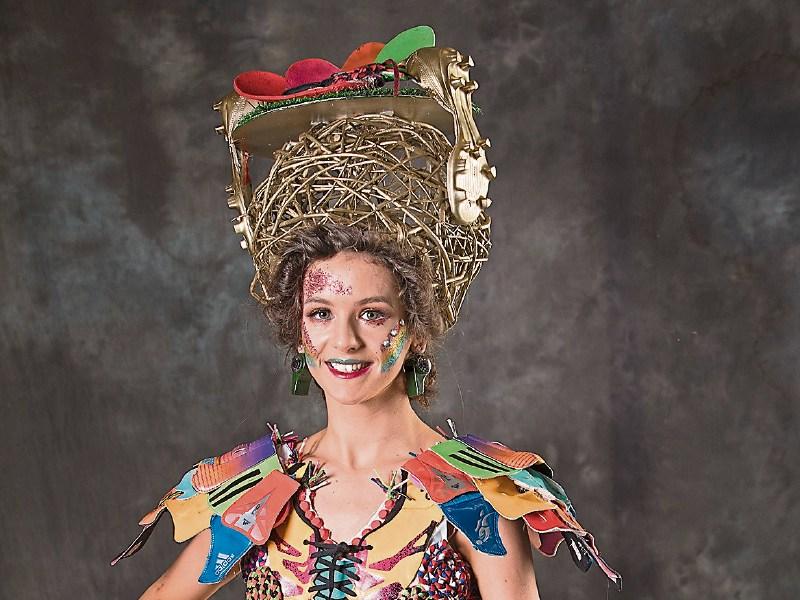 Amazingly four of the school's six entries qualified for the All-Ireland final, which takes place at the 3Arena in Dublin on Thursday April 19.

Congratulations to the girls on their achievements and their teachers Ms Murphy and Mairead Fennell.

Its concept is based on the soccer World Cup that will be held  in Russia this summer. Materials such as football boots, insoles, laces, football gloves and astro turf grass were used to manufacture the costume.

The various colours represent the different nations coming together to celebrate their love of sport. Its concept is about expressing yourself. Inspired by suicide awareness, the inside parts of a piano were used to relay the message that it is what is inside that counts, not the outside. The girls used the musical term ‘Expressivo’ for the name of their costume.

Their concept is based on Gender Equality. Washing clothes lines and dolly pegs were used in creating the outfit. They used pink and blue clothes line colours to show that both colours should be equal.

‘Dea Di Allumino’ is designed by Lauren Moriarty, Rachel Dorney and modelled by Aoife Walsh (below). Their concept is about giving women strength and courage to face a bright future by staying together in unity. The costume is made from 10,000 ring tabs from Coke cans.

Voting for the costumes coninues online at app.junkkouture.com/home until this Friday, April 6th.

You may vote for all four costumes, and the students are wished the best of luck.