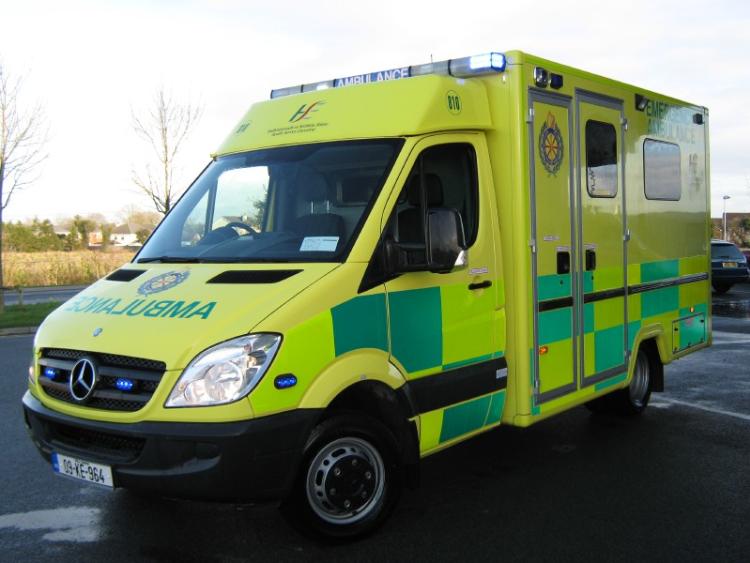 Mr Hickey's heart was shocked three times in the ambulance.

A Clonmel man is being hailed as a hero after his quick actions saved the life of a stranger.

The actions of John Stokes were described as “amazing” and “a miracle” by the grateful family of Michael Hickey who believe their dad is alive today thanks to Mr Stokes.

The Stokes and Hickey families had been enjoying Easter Sunday afternoon with their families when the near-tragedy struck.

Mr Hickey had been visiting his sister in Clonmel and his family think he was driving home on his own to his home outside Clonmel when he may have begun to feel unwell. He pulled his car in to the side of the road in the Wilderness/ Carrigeen area of Clonmel shortly after 3pm.

Somehow Mr Hickey managed to keep the car in gear and a foot on the clutch and accelerator, causing the engine to rev. It was this smoke and revving engine that attracted the attention of two children playing nearby. The children ran to get their parents and John Stokes came to see what was happening.

John Stokes told The Nationalist that as soon as he approached the car he could see a man slumped over the steering wheel. Quick thinking John immediately went to the man’s aid, pulled him out of the car and administered CPR until an ambulance arrived.

“John is a hero on our eyes,” Michelle, Mr Hickey’s daughter said, “we feel a depth of gratitude to him. He did save his life. Without him we don’t know what would have happened to dad.”

She explained to The Nationalist that her father suffered a heart attack that afternoon. His heart had to be ‘shocked’ three times in the ambulance on the short emergency journey to South Tipperary General Hospital. Gardaí were on the scene of the emergency within two minutes and the ambulance within three minutes, Michelle said, but without John’s actions his family don’t know what would have happened. “It was miraculous,” Michelle said.

Michelle and her siblings Mandy, Brian and Robert, and their extended family, are very grateful to John Stokes for saving their dad’s life.

The good news for the Hickey family is that their father is recovering well and making good progress. He received emergency care in STGH and at University Hospital Cork, where he had a stent inserted. His heart is now in excellent condition and he is in great form. It is hoped he will be transferred back to South Tipperary General Hospital this week.

The Hickey family are also grateful to the medical staff of the hospitals in Clonmel and Cork, and the ambulance crew, who have given such great care to their father.

A humble John Stokes said he was glad he could help Mr Hickey and all he wanted was to know the man was ok.

Mr Stokes’ own father was in hospital on the same day, he said, and he was only in the Carrigeen area because he was visiting his sister, who lives around the corner.

John, from Glenconner Heights, in Clonmel, said it was his six year-old son Michael and niece Joanne, who is nine, who realised there was something wrong with Mr Hickey’s car and called him. John said he works on cars at home and his son would know what a revving engine was.

John reacted immediately when he saw Mr Hickey. “I did a first aid course years ago, it just came back to me, like cycling a bike. It came in handy.

“I would advise young people who think they’ll never need it to do a first aid course - I never thought I’d need it,” Mr Stokes said. He made the important point that you do not have to be able to read or write to learn first aid. You’re not learning for yourself but for the person beside you.

“If a person lives it’s everything,” he said.

There was relief for the Stokes family, too, since Easter, as they have had good news about their own father’s health.

Mr Hickey and Mr Stokes are expected to get together as soon as Mr Hickey is feeling better because he wants to thank the man who saved his life in person.