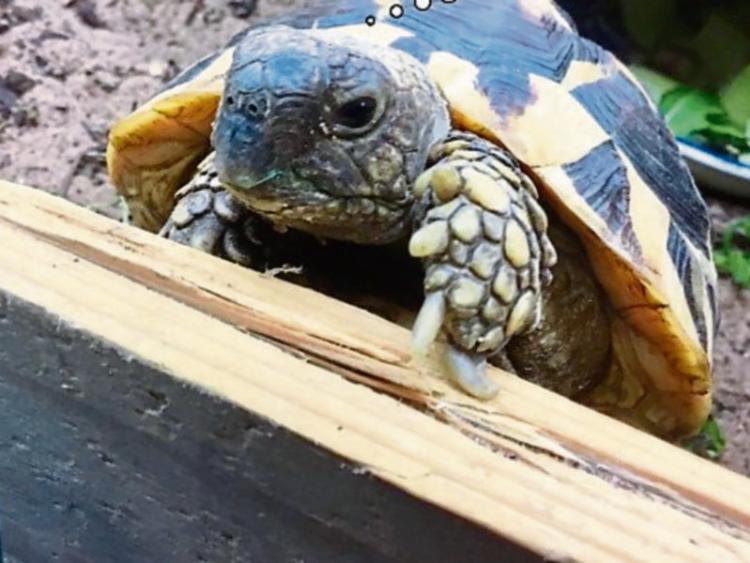 Mr Phobal calls into the school every day and students are free to come down and feed him, stroke his shell and rake his enclosure.

Coláiste Phobal’s Chaplain, Fr Lorcan Kenny, is the man behind the tortoise. He says he started planting the idea of a tortoise support pet for the school in October, but now wishes he had thought of the idea sooner: “If I had known the effect he was going to have, I would have brought Mr Phobal in long ago.” “We had a musical in the school, the Wizard of Oz.

Three dogs played the part of Toto, and when they came onstage, the students’ faces just lit up. I started doing more research and realised that pets are being used in nursing homes across New Zealand, and in America they have court room assistance dogs. There are major health benefits to having these therapy pets,” the chaplain explains.

Fr Kenny says he started reading more about reptiles being used as therapy pets after he realised that having a dog in the school might not be practical. The priest himself is no stranger to reptiles, he has two corn snakes at home called Blaise and Zelda. “Some people don’t do furry. Two girls came to me and said they were afraid of dogs, so I then decided a tortoise would be ideal for the school.” “Tortoises are very symbolic. They take small steps, they don’t carry anything they don’t need… we could learn a lot from them. Even their slow movement is helpful for us. We say that the day moves slowly, but it doesn’t. We are always in a rush,” Fr Kenny says.

Mr Phobal belonged to a couple whose living circumstances changed, meaning they were no longer able to look after him. They are very happy that Mr Phobal is now helping young people cope with anxiety. “Mental health is a huge issue among young people. I decided to take one concrete action to help our students,” Fr Kenny says.

Mr Phobal is quite the personality. “He’s like a Young Offender,” Fr Kenny jokes. “He is so funny, he will put on a show for the students who come to see him, he makes them laugh by knocking over the ladders in his enclosure.”

Mr Phobal can also be helpful to students who are stressed. “He knows when someone is sad or upset. Often students come to me who aren’t able to verbalise their feelings. They can find comfort in watching Mr Phobal’s slow movement, they can feed him lettuce or strawberries, they can rake his pathway, stroke his head and shell… it can be very calming,” Fr Kenny explains.

“Mr Phobal is a curious mixture of gentleness and fun. He is a Hermann tortoise, so he is relatively small, can recognise faces and has a good temperament. I also think that the lads are more inclined to spend time with him. If we had a support kitten, they might not be seen interacting with something so cute. Tortoises are more unusual, so maybe they have a bit more street cred,” Fr Kenny explains.

Mr Phobal has his own enclosure in Coláiste Phobal Ros Cré that was made by three girls in Transition Year, with some help from a few boys in their class. Mr Haugh, a former student of the school who now teaches woodwork, supervised the project. The enclosure has a space for the tortoise to roam around, has a natural design, and has positive sayings written on the sides.

Mr Phobal stays in Fr Kenny’s office and students can visit him there in their own time. Two TY students have also made a poster about Mr Phobal which hangs outside the school’s front office. “The poster explains who he is to visitors to the school, that we are grateful to his former family for giving him to us, and how he helps us,” says Fr Kenny.

“One of the things that students see when they look at Mr Phobal is that he only carries what he needs on his back, and what he doesn’t need, he doesn’t carry. This idea is vital when it comes to managing anxiety. We need to be able to unburden ourselves from worry and stress,” Fr Kenny concludes.