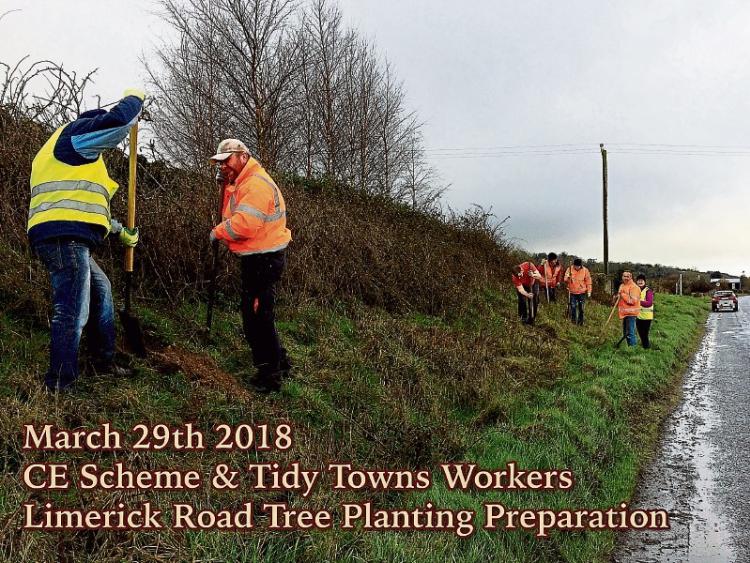 Encouraged by increased marks in the 2017 Tidy Towns competition and gaining ‘silver’ recognition, helped by judicious tree planting in and around the town, Roscrea decided to go all out on a tree-planting programme for 2018.

Tidy Towns and the local branch of Crann joined forces to plant over 4600 trees during the Spring. The physical planting (and the future care and watering) was handled with great expertise by the Community Scheme under its foreman Paddy Reidy.

Tidy Towns officers, Dennis Ryan and Dick and Mary Conroy did Trojan work throughout the Spring Tree stakes were again sponsored by Standish Sawmills as were the ties by Doherty’s hardware.

Major encouragement early in the year came from the not-for-profit organisation, ‘Trees on the Land’ when an order for 2000 subsidised whips – whitethorn, blackthorn, birch, alder, rowan, wild cherry, hazel, apple and scot’s pine – was augmented, given the scope of our community application, by a further gratuitous grant of 1000 trees.

These have all been planted in estates, on private property, in schools, in a nursery field and in pots for children to ‘adopt a tree’ scheme.

Some of the alders are in pots for planting later along the river bank in town. One hundred and fifty other potted whips like larch and lime were also acquired and will be used for the project. Through the generosity of the Madden brothers their field on the Birr road, near the centre of town, was made available as a nursery.

The eight apple trees (with two crab apples for pollination) went to start a community orchard at Sheehane estate.

With a little luck we can look forward to apple tarts from the varieties in the not too distant future: Ballyvaughan Seeding, Discovery, Greensleeves, Katy, Mrs Perry, Red Falstaff, Scarlet Crofton and Widows Friend.

Some 1,200 hedging beech were put down at strategic places which will eventually cover up poor sites and fencing.

Through Milltown Garden Centre and Crann’s great supporter, Matt Fogarty and his nursery, standards of oak, plane, hornbeam and beech from 3 to 4.5 metres high were planted.

The eighty hornbeams lining the Limerick road (the old N7) into town were augmented by nearly the same number this year. Fifty 3m high beeches now line the Templemore road. The planes were planted on the Birr road, again through the generosity of the Maddens brothers. These were planted along the roadside and railway line and will have suitable plaques to commemorate the twenty-one gold medals won by Roscrea youngsters in last year’s Community games.

Each estate also has commemorative oaks to celebrate the highly successful soccer league started last year. Roscrea People hopes to supply commemorative plaques for these too. A small memorial garden has also been started in Gleann Glas. Indeed, a most heartening feature of the tree planting programme has been the manner in which the estates have embraced it and the awareness of trees that it has created. It is fervently hoped the streets of Roscrea will follow their example. What a difference window boxes, hanging baskets or just trees in pots outside each premises would make. Potted trees are available for any premises who wish to take up the offer.

At the new Sacred Heart Primary school two large memorial trees, again sponsored, were planted. A Dawn redwood (Metasequoia glyptostrobides), called Aisling’s Tree, remembers all the deceased past students ( from 1862 to date) and a pedunculate oak (Quercus robur) was planted in honour of all the SH sisters who served the Roscrea community from 1842.

They wont all survive and grow to maturity but many will and go on to enhance this small midland historic town in the heart of Ireland.