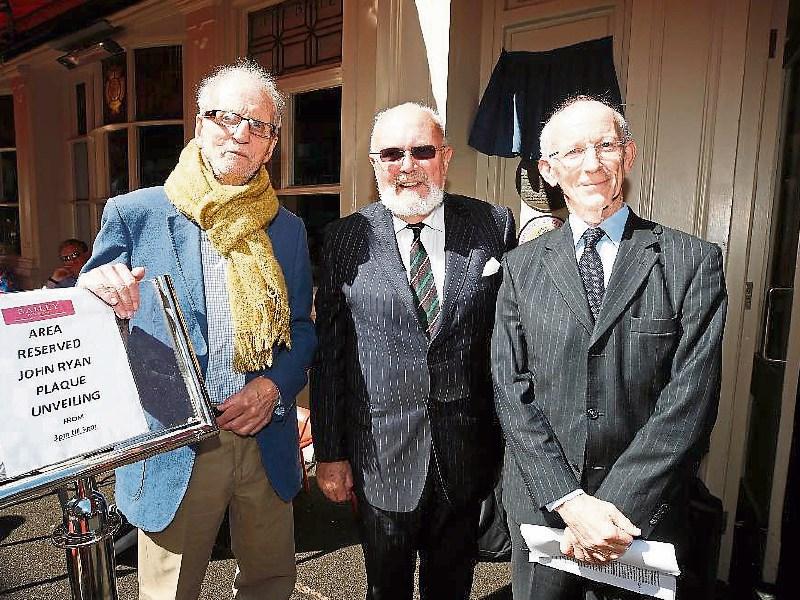 Toomevara author Brendan Lynch, left, at the unveiling of a plaque in Dublin to fellow Tipperary writer and artist John Ryan, with Sen David Norris, and commemoration organiser Peter McDonnell

He was founder of Envoy literary magazine, and benefactor to Brendan Behan, Patrick Kavanagh and many writers of the 1950s.

John Ryan’s father Seamus, a South Tipperary senator, founded the Monument Creameries chain of restaurants. John’s sister, Kathleen Ryan, was a film actor who appeared in such films as Odd Man Out.

“In the late 1950s, I lived in the heart of Dublin’s Bohemia in Upper Mount Street. The Censorship Board ensured that John Broderick, Austin Clarke and John McGahern followed Sean O’Casey into exile,” said Brendan.

“At the heart of this flowering was John Ryan, whose largesse and encouragement nourished so many of them, and whose Envoy campaigning helped end the ludicrous ceonsorship, which had sent the likes of Sean O’Casey, Samuel Beckett and John McGahern into exile.

“John was also very helpful to me when I was preparing my books on literary Dublin. We had many a chat, as I wheeled him around Donnybrook’s Royal Hospital before his untimely death at the age of 67,” he said.

Among the attendance were John Ryan’s widow, Dee, and her family, and Philip Donleavy, son of Ginger Man author JP Donleavy, whose first story John Ryan published in Envoy magazine.

“This commemorative plaque is a fitting tribute, not only to fellow Tipperaryman John Ryan, but also to an inspirational and unforgettable era in Irish literature and art,” said Mr Lynch.

Brendan Lynch expects to publish his next book, Princess of the Orient, in August.