Fethard remains "the heart of Irish hunting and the horse"

A look back at Fethard hunting from 50 years ago! 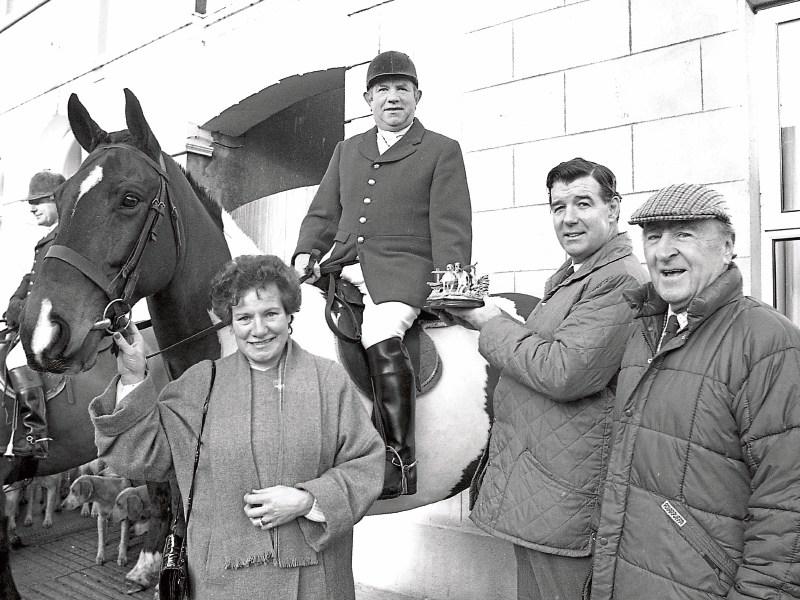 In January 1991, Tipperary Hunt made a presentation to Michael Flanagan and his wife Margaret, to mark his 40th season as kennel huntsman, the presentation was made by Brian Duffy.

The following article by correspondent ‘Sealgaire’ was published in The Nationalist newspaper fifty years ago on November 30, 1968.  Fethard is still the heart of Irish Hunting and The Horse, and thankfully just as exciting for the present-day followers as it was back then in 1968. We take this opportunity to wish Mickey Flanagan, Tullamaine, a very Happy 85th Birthday, celebrated with his wife Margaret and family at his home on August 4, 2018. Mickey first joined Tipperary Hunt on Friday, March 2, 1951, when he was appointed as whipper-in to T. Ryan for the following season.

The day was fine and the turnout, of sporting people was equally so. In reply to Canon Lee’s welcome Lieut-Col P. C. Blake said that uninformed city slickers had been casting aspersions on this ancient Celtic sport of hunting game on foot in letters to daily papers and scurrilous personal letters to our clergy. They had not sufficient back-bone to come before such a fine gathering of sporting country people and make their puny objections. He thanked landowners for sportingly giving a welcome to the hunt and appealed to all followers to close gates, to do not damage to fences and avoid bloodstock and livestock. The three packs were glad, he said, to accept the invitation of Barrettstown Harriers.

He moved off with 21 couple for Mr Delaney’s (Red City) but the pack didn’t integrate so well; the noise from the traffic and big crowd didn’t help and hounds did not know each other. This posed a big problem for the huntsman who had to resort to every trick in the extensive hunting bag of his long experience to show any sport at all.

Mr Jim Looby, huntsman, Barrettstown Harriers, who has a fine antique hunting horn, was first to help when he sohoed a hare in the middle of the pack. ‘Twas a pity the blood sports fanatics weren’t present to see that hare leap – like the deer which she is called after in Irish – six feet over the hounds, land ten feet away, clear and take a left swinging circle. The excitement of hounds and followers was intense.

So much so that she was headed and doubled back by Delaney’s house and headed for the ploughed field where scent went patchy due to strong autumn sunshine. They carried the line to Cahir/Fethard road where the hare crossed.

Meantime hounds hunted a heel line back to the same field and the huntsman, taking hounds along the road, re-entered Delaney's road field again. Not everyone agreed with this tactic. Nevertheless, Johnnie’s judgment was again vindicated when another small stag was on wheels swinging right for the plough. Surely the game must know that scent won’t carry so well there? Anyway, hounds having welded together somewhat better with Killenaule Amber of the chopped tail leading, pressed on across the garden and road past Din Burke's and up Market Hill. As if to show we were in real hunting country and outlier for thought all this music was too near to be wholesome took off for the screen and ample covert of Mr Goodbody’s (Lakefield) and thence to Grove wood.

With particularly fine specimens moving in all directions (we hope this does not upset Sir Charles Parke's all-embracing plans) you could forgive the pack for dividing. Paddy Coffey and Johnnie O’Brien gave wonderful help in collecting hounds for a new draw. Jim Crean’s (lower Market Hill) never fails to hold a hare but despite the best efforts of huntsman, hounds and John Looby, Tom Cummins, Johnnie Hurley, Jim Ryan, Jimmy Gorman, Christy Nagle, Denis Martley, Nicky Fitzgerald, the fine fields of cover proved blank. At that we had had three hours of music, excitement and good sport so all were happy when Johnnie blew the call for home.

Johnnie O’Brien, who hopes to don the blue and gold jersey as a whip when his duties at Rathduff stud permit, will miss next Sunday’s meet by invitation of Mr and Mrs T. F. Ryan. MFH, Scarteen. He was third whip for the first meet there 13 years ago. By the way, Barrettstown Harriers have a loose organisation in which all members help but as in every voluntary body the big can is carried by the few. In this case, John Looby and Tom Cummins. Tom’s dedication to sport, in spite of his modesty, extends to freely making his car, tractor, time and energy available as and when required.

Excellent hospitality was extended to Killenaule and Kilfeacle. Cashel were unable to partake, as they had to bring hounds home. Mrs Aherne, assisted by Mrs Looby and Mrs Fitzgerald, provided a first-class meal. The hunt dance afterwards was a great success.

What's the betting on Fethard?

Many old sportsmen in Fethard claim that it is the centre of Ireland’s best hunting locality. Does the name of the place in Irish give us any clue to this? Maybe with all the talk of higher education, teach-ins. sit-downs and mergers, some higher educated person would venture an answer to this simple question. Anyway, place names in Irish tell a story: their English corruptions tell us nothing. Fethard has a concentration of castle: Barrettstown, Cramp's, Slanestown, and others meaning that the area was of strategic importance and/or a very desirable place to live. To live in the full sense of the word meant that there were facilities for full enjoyment of the pleasures of the chase, amongst many other things.

The honour of being the heart of Irish hunting which, ipso facto, must also be in the running for world honours, is a big one. Fethard is definitely at the starting gate with the white flag up. At all events, Barrettstown Harriers are put to the pin of their collar to hunt the area of Coolbawn, Coolmoyne. Knockelly, Farranaleen, Killerk, Downey’s cross and Coleman – not to speak of the immediate environs of the town.