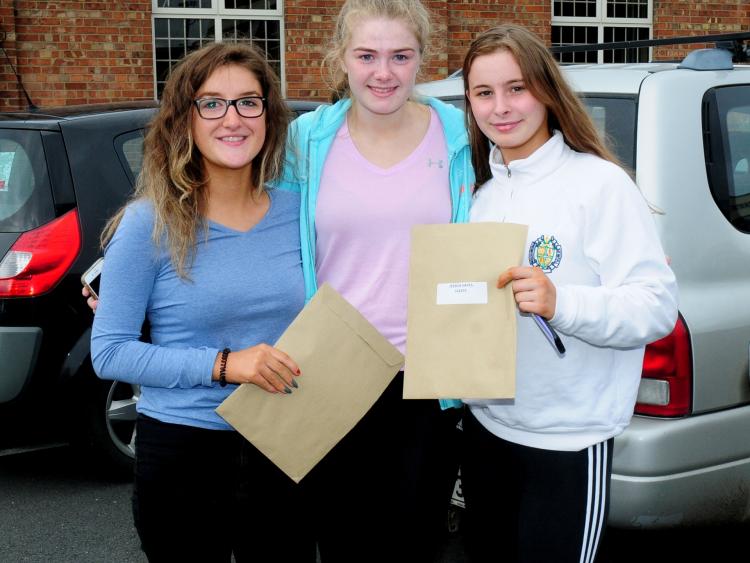 Patience finally paid off for the 2,169 Tipperary students eagerly awaiting their Leaving Certificate results as hundreds filed into their former schools to collect the all important document from 9am this morning.

Schools across the county reported "incredible results" with a number of students scoring the maximum points available in the exam.

In Thurles, Colaiste Mhuire Co-Ed student Scott Beaton achieved 7 H1's with top marks in Business, Biology and French earning him a place at the University of Edinburgh to study Middle Eastern Studies this September. The Templetouhy native will now follow in the footsteps of his grandmother and uncle who also attended the prestigious college and says he hopes to go on to join the United Nations after being inspired by his parents who both work with the HSE.

"My mother is a Community Mental Health nurse and my dad also works in the HSE so I knew I wanted a career that can help people. Joining the UN would be my dream," says the ambitious student who has already started studying Arabic ahead of his course start date next month.

Colaiste Mhuire Co-Ed Deputy Principal Clare Wallace said students at the school "excelled" in the Leaving Cert and Leaving Cert Applied examinations with all students securing enough points to get into their chosen career field.

"Everyone got the points they wanted and our students can't wait to get their CAO offers on Monday to study courses in teaching and nursing. Several of our students have also decided to go down the apprenticeship route to become electricians and carpenters which is also very encouraging," she added. At Thurles CBS, Acting Principal Kathryn O'Brien says the clear delight on the 130 students who collected their results this morning makes everything worthwhile for the entire teaching staff.

"We are absolutely delighted with their success. Their hard work and effort are to be commended. Today is a day they will remember for their whole lives and we wish them all the best in their career options."

"Our students scored particularly well in maths and practical subjects and we are completely thrilled with their success. It's an incredibly exciting time for them and we can't wait to see what they'll do in the future. Our interest doesn't stop today, the CBS connection is longer than their six years in school and we want them to keep in touch and visit us in years to come," added Ms O'Brien. In the Presentation Secondary School Thurles, celebrations were in order for all 115 students who walked through the doors this morning with Principal Marie Collins saying the entire staff were "over the moon" for the class of 2018.

"Their smiling faces say it all," Ms Collins told the Tipperary Star, as dozens of students hurried about the corridors celebrating with friends.

"Our students are hoping to study Medicine and Veterinary with a very high percentage receiving over 500 points so we are confident they will get their first choice offers on Monday," she added.

Similar celebrations were also in order at the Ursuline with Deputy Principal Mary Slattery commending the high volume of students who "broke the 500 points barrier."

"Overall our students were very happy with their results and we expect many to get their first choice offers on Monday. We are also immensely proud of the students who had to work that little bit harder to get what they wanted and we are confident they will reap the fruits of their labour," she added. Special congratulations were also in order for St Joseph's College, Borrisoleigh student John Ryan who achieved 7 H1s, and 625 points in the Leaving Cert - the maximum number of points possible.

The gifted student, who has excelled in the ‘Young Scientist’ awards and computer science, is now contemplating studying at one of Oxford’s prestigious Universities this morning, after receiving his Leaving Cert results.

"We are delighted with with results and most students seem to be pleased," said Michael Dineen, principal of St Mary's Convent Secretary School in Nenagh.

A number of students got over 500 points, he said, and once again, the school had high academic achievements.

"We are very happy," said Ms O'Donnel. "We had a couple of students with over 500 points."

Ms O'Donnell said that they had "no evidence" of reports nationally that there had been a high failure rate in Maths.

Nenagh CBS also follows the Leaving Cert Applied course and Ms O'Donnell said that the 12 students who sat the exam had either received merits or distinctions.

Over in Nenagh College, principal Damien Kennedy was "more than happy" with the Leaving Cert results, saying they were in line with national norms.

"The results were in line with what we expected," he said.

Mr Kennedy also said they had no issue with Maths results.

Leaving Cert Applied students also had excellent results,with 80 per cent of them receiving a distinction.

He also had no issue with Maths results. A total of 94 students sat the Leaving Cert and he said that the focus now for those students would on next Monday when the first college offers were made by the CAO.

Mr Carr was also happy with the Leaving Cert Applied results. Eight students took the exam with a number gaining distinctions or merits.