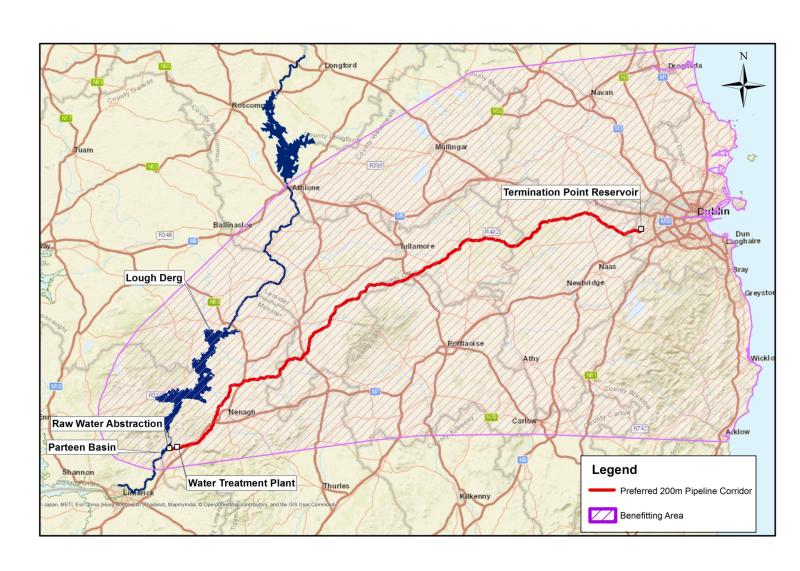 The proposed route of the planned pipe line

Farming groups voiced their opposition to the Irish Water to pump 330 million litres from Parteen basin to the Greater Dublin area at a meeting in Nenagh Arts Centre.

The rally against the Irish Water proposal to bring 330 million litres of water daily to Dublin was organised by the River Shannon Protection Alliance, Kennedy Analysis and Fight the Pipe.

ICSA rural development officer Seamus Sherlock, told the meeting that it was “scandalous” the way Irish Water was behavinbg towards those opposed to the plan

“We won't stand for compulsory purchase orders,” he declared. “People power will beat this.”

He reiterated the association’s position that it will support all landowners affected by the proposal.

“There is a lot of disquiet among farmers in this region about the proposed water pipe; It is quite clear the whole logic of the project needs to be critically evaluated by the political process before any public money is committed,” he said.

He warned that there will never be clarity around future water requirements until the myriad of problems in Dublin were fixed. Irish Water currently loses 49% of its own product through leaks. It makes absolutely no sense to pipe water half way across the country for it to leak back into the groundwater through faulty pipes and for it all to cost the princely sum of several billion euro,” he said.

Mr Sherlock said that farmers were sick with worry about the potential impact of a pipeline being forced through their farms with the potential for extreme short term disruption and long term devaluing of the land.

“While we are not against progress we are against waste and the case for this pipeline seems very dubious,” he said.

Mr Sherlock said fixing leaking pipes needed to be a priority before any money was wasted.

“I would also like to make quite clear that this is not just an issue affecting farmers, the whole community is affected and are abjectly opposed to wasting vast sums of money on this,” he sad.

Tommy Egan, also of the ICSA, said it was “crazy” that Irish Water was thinking of putting a spur from the pipe to Athlone on Lough Ree. “It is impossible to estimate the amount of damage that will be done to land,” he said.

William Reid, chair of Offaly IFA, also spoke out against the proposal.