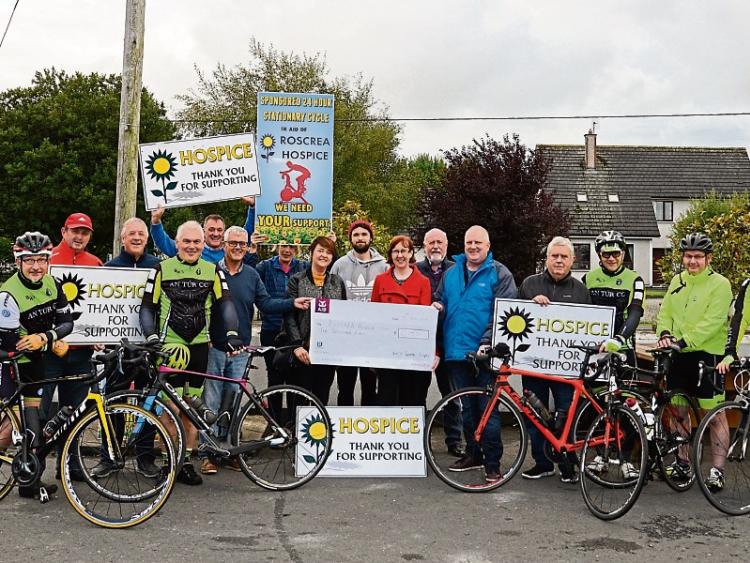 This simple but brilliant idea is in its fourth year and was an idea of long serving committee member Colm Brophy and is organised and run by the Hospice Fundraising committee in Roscrea.

The format is simple. 48 people cycle a stationary bike for 30 minutes each. Sponsorship cards are distributed and money is raised for hospice.

Sounds simple and it is but it still takes a lot of work and commitment on behalf of committee and volunteers.

In an era where lots of organisations are trying to find innovative ways of raising money, this is a major winner for the committee in Roscrea.

The committee would like to thank all those who helped in any way. Sean O`Connor and the county council for cordoning off the area prior to the cycle, Michael Breen for allowing us to use the front of his premises, his electricity and also his lane way, Dermot Ryan for the use of stools and tables, Ger Hogan for his bike and roller, Leamy’s for the loan of the van, Ger O’Meara and Killian for help taking it all apart.

On Saturday afternoon local musicians took to the stage and entertained the cyclist, volunteers and pedestrians alike and we would like to thank them for their time. There were too many to mention and we don’t want to leave anybody out.

The cycle would not have taken place if it wasn’t for the 48 cyclists who took part and raised the money. The total raised this year is about €10,000.

Special thanks to Roscrea First Responders who stood by for the full 24 hours especially Beany O`Lone who completed the whole event.