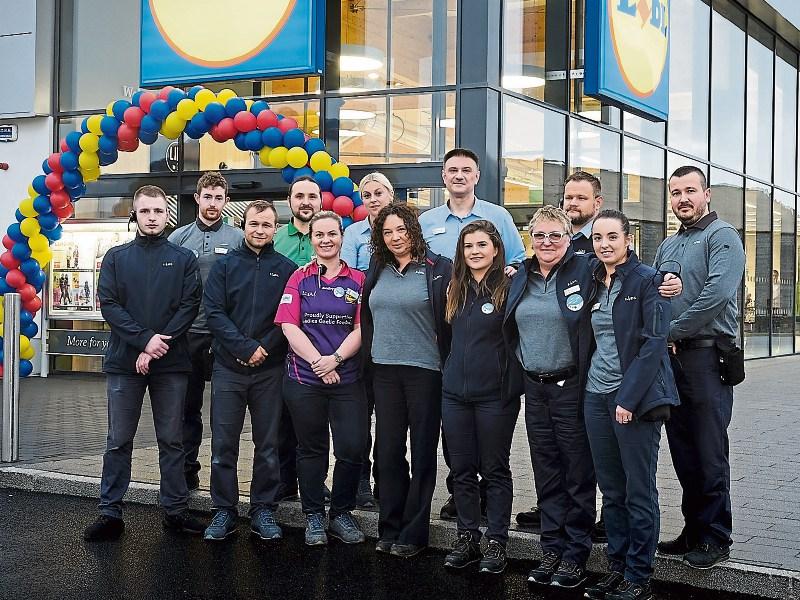 The staff at the new Lidl store in Nenagh

Lidl opened in Nenagh in September 2001 and the construction of the replacement store took six months to complete.

The new store boasts a modern architectural design and spacious interior layou. Customers will also be able to avail of 179 car parking spaces, which include a number of disabled and parent and child spaces.

The new store incorporates a range of strategies to reduce environmental impact. It is powered by green electricity and is certified to ISO50001 energy efficiency standards.

Over the next few weeks a solar photovoltaic system will be installed which will generate approximately 25 ‘per centof the store s energy requirements. The store also offers customers free use of a number of electric vehicle charging points.

Lidl Ireland recently announced its commitment to the introduction of electric vehicle charging points to all new stores and across all major store refurbishment projects.

Speaking at the Lidl Nenagh reopening, Miroslav Kokot, Store Manager said: “We are honored to have Tipperary ladies football captain Samantha Lambert join us to open the new store. I am also delighted to welcome a number of new recruits into the teams. We would like to thank our customers for being so patient throughout the past few months of construction and all our staff for their hard work and commitment.

To celebrate the opening, Lidl will also welcomed Cllr. Michael Smith from Autism Awareness Roscrea and Pat Carroll from St. Vincent de Paul Nenagh collect a donation of 500 each to go towards the charities and the hard work that they do.

The opening was welcomed by local TD Alan Kelly who thanked Two-Mile Borris developer Martin Healy for the interest he had shown in Nenagh by redeveloping the former O’Connor’s shopping centre site.

“The site was left derelict for many years until Martin purchased it and only for him it may have remained so,” he said.

Deputy Kelly said that he had been delighted to be able to work with Mr Healy to develop the site and ensure vibrancy was brought back to that “very special site” in Nenagh.

This district has a great future with future shopping potential in the area along with the redevelopment of Sheehan’s Hardware and the proposed redevelopment of the Mr Price building as well,” he said.

The Labour TD said that he was looking forward to all this work going ahead and knew there were other future development plans in the town as well that will compliment these ones.

“It shows how Nenagh as a town is growing and that was reinforced recently when it was announced that Nenagh is he fastest growing town in Tipperary,” he said.

With new industries such as First Data and new gas, water and sewage infrastructure aided to a fantastic location Nenagh will go from strength to strength in the coming years, said Deputy Kelly.