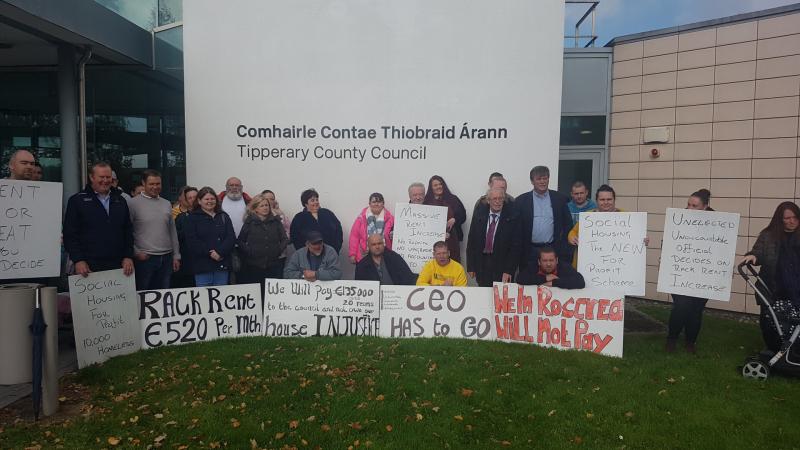 Over 40 people staged a a peaceful protest at Nenagh Civic Offices this Wednesday in protest over Tipperary County Council's decision to harmonise in the wake of the amalgamation of North and South County Councils in 2015.

According to the organisers, many see the rises as a "rack rent" increase forced on them by the Tipperary County Council CEO

All 40 county councillors and Tipperary's five TDs had been invited, according to Mr Edwards.

Cllr Michael Smith was also present, but the organisers stated that the Roscrea councillor had not taken part in the protest when they entered the building.

They described the protest as "peaceful and even jovial".

Since the increase in August the rent arrears total has increased by almost €200,000 an indication that many can just not afford the €50--€70 increase per week forced on some tenants whose only income increase was €5 on social welfare, they said.

Many are worried for the most vulnerable, the elderly and those on fixed social welfare payments, considering the increase level this will leave many unable to buy fuel for heat this winter.

"If the rules only allow a specific percentage to be taken, top-up cards are ill advised," said the organisers.

Many tenants had been shocked to learn that welfare payments to struggling low paid workers (FIS) was being used to calculate rent along with Carers Allowance.

Social welfare was supposed to be the bare minimum needed to survive, yet despite only a €5 per week increase many had seen increases of €40, €50 and €60-€70 per week in rent, they said.

Those organising the protests, who are based in Roscrea, Nenagh, Borrisokane, Templemore, Clonmel and now Carrick-on-Suir, say the protest will continue and will grow until the CEO or those elected to represent them decide to see the reality many face and end what they said were these "massive increases" until the National Rent Review was complete or a more realistic rent increase was applied.