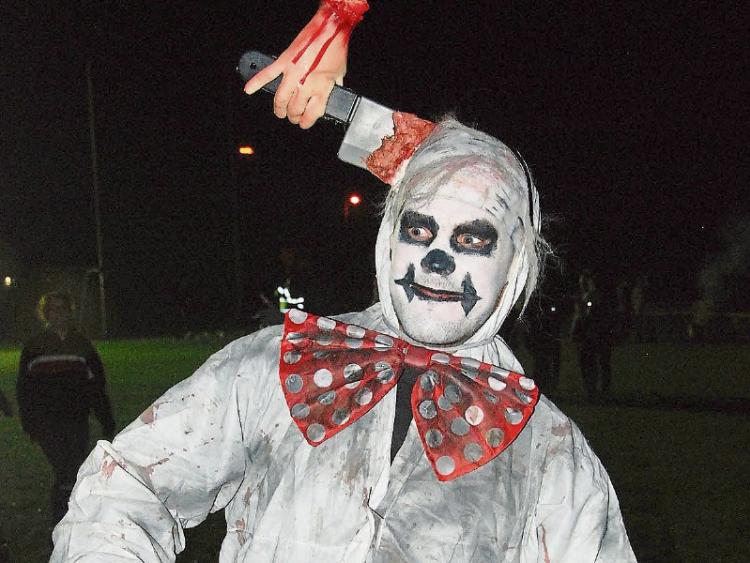 This was the second year of this event and what a success it was.

Families came from near and far to enjoy the festivities. People from all age groups dressed up in Halloween costumes and thoroughly enjoyed the night. All children were given a goodie bag and glow sticks as they entered through the spooky entrance.

There were also prizes given on the night for best costume. Congratulations to Keelin Begley who won the prize for best boy costume, Libby Dynan who won best girl costume & Christopher Loonam who won best adult costume.

Roscrea Halloween Festival committee members Shane Lee, Shauna Nolan, Claire O’Meara and Gillian Pearson, worked day and night for the last few months planning this event. They approached local businesses’ seeking donations and as always the business people of Roscrea were only too happy to help, without their kindness and generosity this event would not have went ahead.

The committee also held a street collection, and wish to thank the local community for their generous donations. Chairperson of the committee Mr. Shane Lee would like to say a huge thank you to the local residents for being so supportive of this event and were willing to help in anyway they could.

Shane would also like to say a huge thanks also to everyone who donated their time and services on the day, especially David Mitchell - Bounce About, Kieran O’Meara, Sean Hogan, CE Scheme workers who very kindly helped the committee erect marquees, DJ Carly Keane & local band Farhaven for their fantastic entertainment, Mary McNamara who made fairy doors with the kids, Caroline and Martina Phelan and Tara Rowan who manned the shop on the night, Taffaline Dynan with his helpers Sean Nolan and Ryan O’Meara for manning the road and ensuring the safety of all pedestrians, Katie & Sarah Dynan our facepainters, Paul Hogan Electrician and his team who were on hand to make sure everything worked properly, our photographers Sean Hogan, PJ Wright, Mark Fletcher, Noel O’Meara & Christy Behan.

Also a huge thank you to all our volunteers on the night only for ye the night would not have went ahead.

A special thanks to Principal of Coláiste Phobal, Mr. Michael O’Connor for the use of the school field for this event.

Mr. O’Connor has always been very helpful to the committee and very supportive of this event and we look forward to working with him again next year. A word of thanks must also go to Monty Franks, school caretaker, for coming in after hours to open the school car park for people attending the event.

Shane would also like to give a special word of mention to Shauna Nolan, Gillian Pearson & Claire O’Meara, “without the hard work from these three ladies this night just would not have been possible. They went above and beyond and that really showed on the night.”

Finally, one last word of thanks to the people of Roscrea who attended on the night, seeing the joy and happiness on all your faces made all our hard work worthwhile.