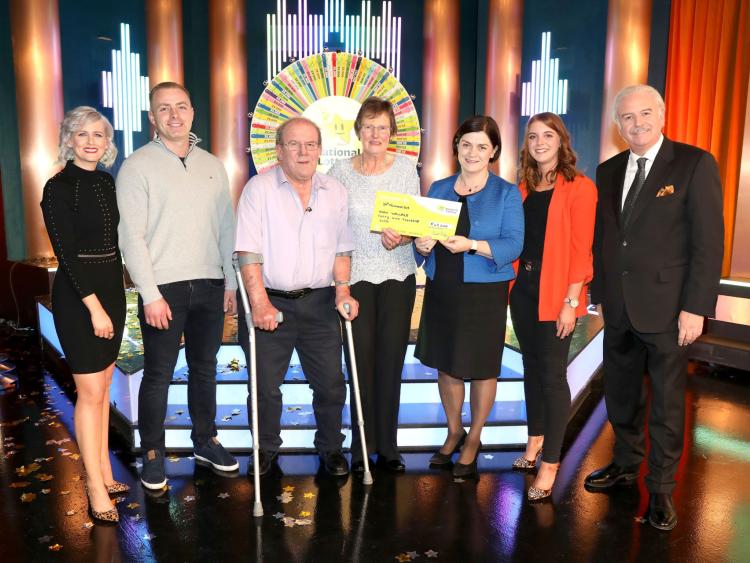 Two Tipperary people shared a whopping €97,000 between them when they appeared on the National Lottery Winning Streak Game Show TV game show last Saturday (24th November). Among them was Percy Wallace, from Roscrea, who spun the wheel for his wife!

The two Tipp players, both grandparents from Thurles and Roscrea, admitted they were watching the historic Ireland-New Zealand rugby game at the same time as Winning Streak so missed seeing their names being called out live. However the news was not long filtering through to them from relatives and friends.

Percy Wallace represented his wife Joan, who ran into the living room screaming the news she had been selected to appear on the show while Percy was watching the famous Ireland rugby win. Eventually Joan calmed down and revealed that Percy will appear on Winning Streak the following week.

Percy certainly did Joan proud by spinning the wheel and winning €25,000 bringing Joan’s winnings to €49,000 in total. Percy and Joan celebrate their Golden Wedding anniversary next summer. As well as Joan Percy was also supported in the audience by their two daughters, Elaine and Avril, along with a number of other family members including two of their grandchildren.

Now retired, Percy likes to relax by watching sport on television and he and Joan plan to give the family a good Christmas with the windfall.

Meanwhile Noreen Landers from Thurles got the call from her mum, Nora, who told her that her name had been selected to appear on Winning Streak. Noreen had to do a double take and said that she thought she was dreaming. She won a very respectable €48,000.

Noreen was supported by her four sons: Darren, John, Andy and Michael in the audience on Saturday along with her mum, Nora, a massive fan of the Winning Streak programme since the beginning. They were joined by Noreen’s four sisters: Eileen, Anne, Mairead and Kathleen, along with other members of the family.

Noreen is a proud grandmother to ten grandchildren, all of whom were proud to watch her on TV from home. During the day Noreen is a carer for her mum and also works in Rockwell College on a part time basis as a caterer.

A proud Tipp woman from Annacarty, she returned to live in tipp a few years ago having lived in Limerick for more than 20 years. She has no plans yet on how to spend her Winning Streak winnings.

A brand new-look Winning Streak scratch card is available in the 5,900 National Lottery retailers all over the country, where as well as the chance to appear on the Winning Streak TV game show if you  get three stars, players will also be in with a chance to win some great cash prizes up to €5,000. The odds for those who purchase a Winning Streak to win is 1 in 1.76 to win a cash or three star prize.

Players can also send their scratch card stubs into the National Lottery where each week, on the show, a player will be drawn as the winner of a Luxury Cruise for two valued at €5,000. The winner of this week’s cruise is Josephine Dunne from Carrick-on-Suir, Co. Tipperary.

As ever one of the lucky five players will get the chance to spin the wheel and win up to €500,000.  But this series a €100,000 segment will be added to the iconic Grand Prize Wheel every show if less than that was won in the previous show, improving players chances to win a massive prize.