Tipperary towns 'have a huge amount to offer' 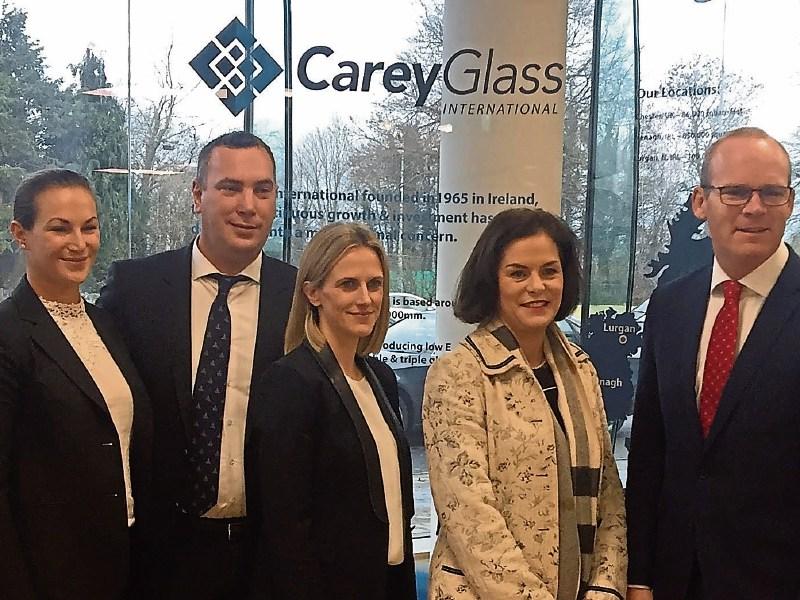 The Tanaiste and Minister for Foreign Affairs, Simon Coveney, has urged Tipperary companies to talk to their local enterprise offices or appropriate agencies to help combat any negative fallout from Brexit.

Minister Coveney was speaking in Nenagh where he met senior management and staff at Carey Glass before going to view the site of the proposed €650m hydro-electric power plant planned for Silvermines and to be developed by Siga Hydro, run by local man Darren Quinn.

Minister Coveney met the staff at Carey Glass in Nenagh for a private discussion, but, when asked about how fearful he was of the effect of Brexit on the company and on Tipperary firms in general, he said that Carey Glass was a hugely competitive company as it was, employing 480 staff.

The company has a plant in Lurgan in County Armagh and in Chester in England, which, he said, gave them options that other companies didn’t have.

“Of course they will be watching very carefully. If Brexit goes in the wrong direction and the value of Sterling were to decrease significantly that would impact on their competitiveness in terms of selling into the UK,” he said. “There are lots of companies like that.”

Minister Coveney urged Tipperary companies to talk to their local enterprise offices or to their appropriate agencies, whether that was Bord Bia, BIM, Enterprise Ireland, IDA.

All of these companies were well resourced to provide the support that companies needed whether that was financial or advice to help companies adapt to the new realities that will come from Brexit.

“No matter how good a deal we get on Brexit it is not going to be the same as today because Britain in the European Union is different to Britain outside the European Union. There will be new things that companies will have to plan for whether that is understanding how customs work for the first time, whether it is looking potentially at their supply chain to where they are sourcing product, maybe it is looking at diversifying away from an over-reliance on the British market, looking at some other markets,” said the Tanaiste.

Asked about the low number of visits by the IDA to Tipperary over the years, and whether or not he was happy the IDA was selling Tipperary, especially in a post-Brexit situation, Minister Coveney replied: “I think Tipperary towns have a huge amount to offer, mainly around their value”.

He described Dublin as “effectively overcrowded”, and said that foreign direct investment companies that were moving to Dublin were having to pay a lot more to meet space than in other parts of the country.

“Towns like Nenagh and Clonmel and Cashel and Tipperary Town and other towns do have, I think, a very strong cost-competitive advantage,” said Deputy Coveney.

He thought there were some opportunities in a post-Brexit environment to see some more FDI coming to Ireland that otherwise might have potentially located in the UK , and that did open up an opportunity for a county as big as Tipperary.

He said that Tipperary was a county that was a fantastic food producer, a big agriculture county. Most of that product gets exported and a lot of that to the UK.

He said that his job was to make sure we minimise any trade barriers for friction to the €70bn trade relationship between Britain and Ireland, of which about about €5.5bn was in agriculture and food products.

“The impact of Brexit is of great concern to Carey Glass, and they were delighted with the opportunity to discuss possible Brexit implications with Minister Coveney,” she said.

Ms Newman Julian said the management at Carey Glass had the opbportunity to discuss their concerns with regard to Brexit, among other issues, with the Tánaiste, and Minister Coveney welcomed the opportunity to meet many of the Carey Glass team.