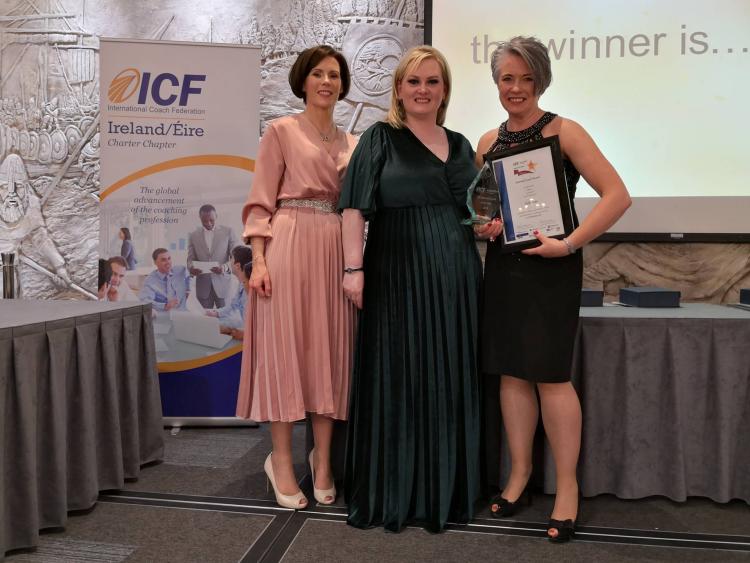 A workforce development lead with the HSE/South East Community Healthcare has been honoured by the International Coaching Federation (ICF) Ireland at its recent 2018 awards ceremony.

Clonmel-based Hilda O’ Neill (Ryan) took two of the 12 awards at the ICF’s Irish chapter’s annual event held at the Clontarf Castle Hotel in Dublin. She was named both Internal Coach of the year and adjudged by her peers in ICF Ireland to be overall Coach of the Year.

Founded in 1995, the ICF is dedicated to excellence in coaching. It serves as a non-profit organisation for fellow coaches to support each other and plays an active role in helping members to develop their coaching through regular events, communications and networking opportunities.

Now in its fifth year, the ICF Ireland gala awards is recognised as the premier event for coaches, industry and organisations. The purpose of the awards is to promote excellence, best practice and innovation in coaching.

Coaching is described as a thought-provoking, creative process that supports clients in achieving a specific personal or professional goal. In an organisation such as the health services, this can have a positive ripple effect for the individual, their team and the culture of the wider organisation.

Hilda is a professional certified coach, accredited with the ICF and has 15 years of experience in the area of personal and professional development and training. She has passionately incorporated coaching into her work in the health services over the past 10 years. While working in both the private and public sectors, Hilda has developed a special interest in supporting individuals and organisations in relation to managing challenging situations in the workplace.

A native of Ardee in County Louth, Hilda’s involvement as a HSE internal coach in South East has developed over the past eight years and resulted in her secondment this year to the newly developed interim role of workforce development lead in the human resources department. This role has a specific remit around supporting and developing staff, managers and teams in counties South Tipperary, Waterford, Carlow, Kilkenny and Wexford through coaching, facilitation and training. South East Community Healthcare delivers primary care (including community services), social care (including services for disabilities and older people), mental health, and health and well-being.

"As Hilda herself has said on many occasions, everyone has the potential to change, grow and develop and is more likely to do so when supported in a practical and positive way. That certainly ties in with what we are trying to achieve within the health services in the South East and we are delighted that this national recognition has been afforded to one of our colleagues.”