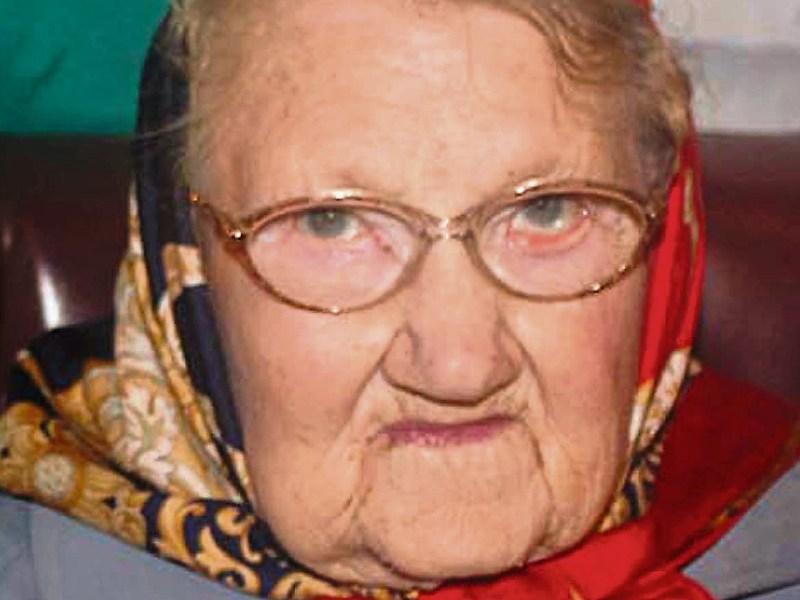 Peggy Hurley: passed away a couple of weeks from celebrating her 102nd birthday

Peggy Hurley from Carrigatoher, Burgess, outside Nenagh, passed away on Tuesday just a few weeks short of her 102nd birthday.

Born on January 11, 1917, in Burgess - in the same house where she livesd until recently - Peggy saw many changes over her long life.

On her 100th birthday, she remembered walking to school in Ballywilliam, a journey of about three miles.

Peggy was the third child of James Hurley, a farmer, and Mary née Maher, whose family were local blacksmiths. Her uncle, Martin Maher, lived to be 103.

She had four brothers - Jack, Billy, Jimmy and Mick - and one sister, Nelly.

Peggy and her siblings worked the family farm. They were dairy and tillage farmers, and they also kept pigs.

Peggy recalled how her family was nearly always “self-sufficient”. They had their own milk, meat, potatoes and other vegetables. They needed to go into town only once a week, sometimes less often. She was an accomplished baker too.

When she was growing up, dancing was the pastime that all the young folk looked forward to. They’d go “dancing at the crossroads” at the Five Alley on the old Nenagh to Limerick road.

Peggy also had happy memories of cycling over to Shouldice’s hall in Portroe where they’d dance on until 3am before cycling home again.

With all the talk of storms and bad weather down the years, Peggy could recall the a blizzard that struck Burgess in 1933, a freezing storm that lasted a day and a night, trapping everyone indoors to huddle around their fire with oil lamps, praying for the tempest to pass. A lot of livestock perished.

But there were also some very dry summers. So dry, in fact, that the well at the Hurley house would dry up. This happened quite often, and the family would have to go down to Patrickswell and carry buckets of water back to the house.

James Hurley was on the local council and Peggy recalled that he was responsible for getting a wall built around the holy well at Patrickswell. The well had up to then been exposed to cattle, geese and ducks and needed to be protected.

Peggy also talked of how, long ago, people used to live in mud cabins around Patrickswell. These ramshackle structures were built up against a ditch and they had holes in their roofs to let the fire smoke out.

She was 22 when the Second World War broke out. Her standout recollection of the war years was rationing, and how fuel became particularly scarce. The only people who had fuel for their cars were the priest and the doctor.

Working the farm all her life, Peggy never married. She never travelled outside Ireland. Indeed, she rarely strayed far from her Burgess homestead.

The family would occasionally go to the seaside on a fine day, but only for the day. Peggy learned how to drive and her first car was a Volkswagen, a black one.

A deeply religious woman, Peggy was at the Eucharistic Congress in Dublin in 1932 and was part of the crowd that greeted Pope John Paul II in Limerick in 1979, recalling how she was up at four in the morning to be sure of getting a good vantage point. She visited the shrine in Knock many times.

Peggy was particularly proud to have been confirmed by Bishop Michael Fogarty of her own parish, just as her father was before her. She said people used to talk of the first time Bishop Fogarty came to the parish and how they lined the road waving the branches of trees to welcome him.

She lamented that all the people she knew and grew up with are now gone, her last companion from school passing away in 2015.

As for the key to her own longevity, Peggy had no answer. She said she ate the same food as she had done all her life, always having a meat and veg in the middle of the day, with porridge in the morning and honey in her tea.