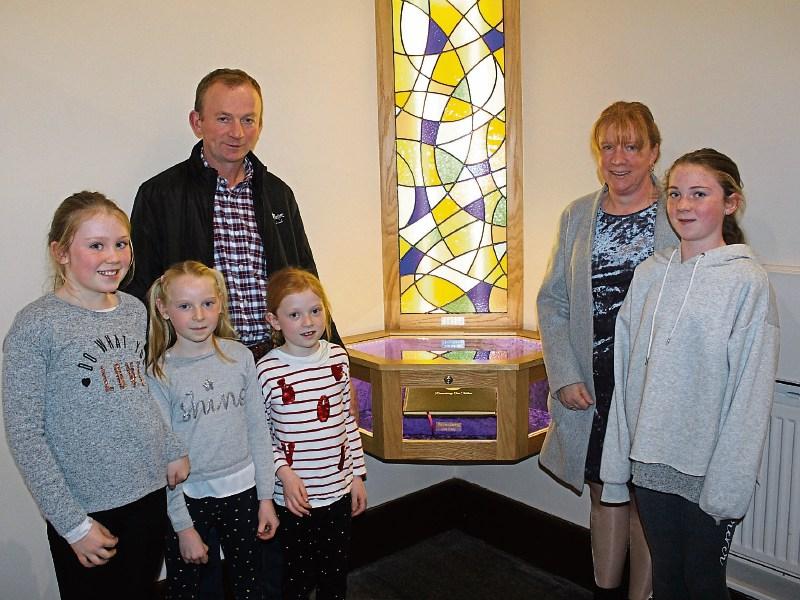 Liam and Yvonne Kelly, Tipperary, with their daughters Belle, Elisse, Ruby and Millie at the cabinet in which is housed the Children’s Book of Remembrance dedicated to their late son and brother Joe

Tipperary families who have lost a child now have a place to remember their loved ones with the completion of a Children’s Remembrance Area in the Chapel at University Hospital Limerick.

The project was the concept of parent Theresa Noonan, whose daughter Katherine died under the care of Hilary Noonan, Children’s Outreach Nurse, UHL, and the Milford Home Care Team. It has been developed by the Paediatric End-of-Life Care Committee at UHL and opened by Sr Helen Culhane, founder of the Children’s Grief Centre in Limerick.

The centrepiece of the new area is the Children’s Book of Remembrance, which is kept in a cabinet beautifully crafted by Mark Griffin and funded with a grant from Milford Care Centre Compassionate Communities.

The specially commissioned stained glass was designed by Alexander Vugs from Ildanach Studios in Cork. The stained glass has many different shapes and colours which represents the uniqueness and individuality of each child remembered. This was sponsored by the Brosnan family in memory of their mother, Eileen.

The Children's Book of Remembrance can be viewed by arrangement through the pastoral care team at UHL. The book will be presented to the altar at the biennial remembrance service. It contains the child’s details and a personal message. The book was funded by a donation from Liam and Yvonne Kelly and family from Tipperary in memory of their son and brother Joe.

Sr Helen said revealed at the opening that before the age of eight, she lost three brothers. Martin was a cot death at three months and twins James and John died at birth.

Colette Cowan, CEO, UL Hospitals Group said pointed out that the area or the book of remembrance were not solely for children who had passed away in hospital.

She thanked the parents, donors, craftspeople and the charitable partners who had made the project possible as well as the pastoral care team and the Paediatric End-of-Life Care Committee