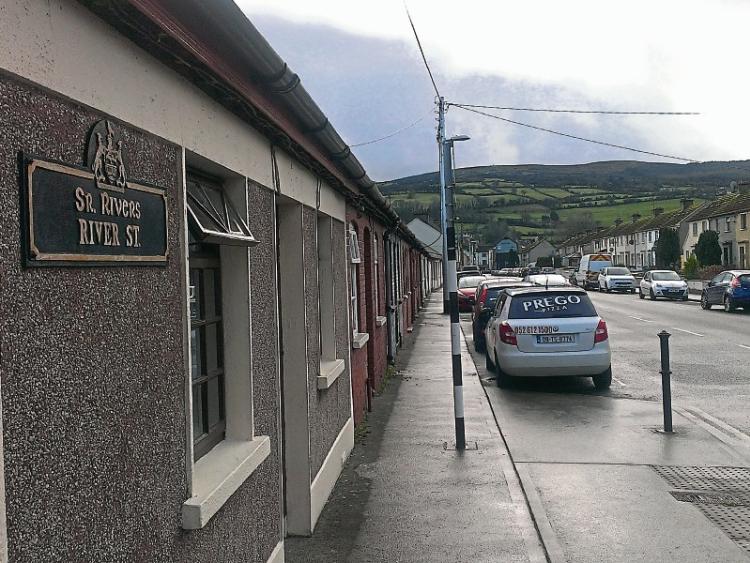 Rivers Street, Clonmel, under the shadows of the Comeragh foothills. The street joins with College Street (formerly Duckett Street) and is the subject of this letter from Tom O'Flaherty, in London.

While looking through old family paraphernalia I came across the attached love story which was written in 1904 by the Clonmel poet, Charles J. Boland. I had read the story many years ago and felt then that it was quite sad. However, upon recent reading I have had a change of heart and I now believe that this tender tale has a relatively happy ending.

Although I am delighted that Miss Duckett achieved her wish to have a change of name through her marriage to Mr. College, my delight is somewhat tempered with regret that Clonmel lost that lovely name Duckett, forever. Thankfully, however, the equally lovely name of Rivers is still with us and long may it continue. The worry is, of course, that some small-minded, two-bit, vote-catching, self- serving politician decides to moot a change in name as in the case of Gordon Street and Prince Edward Place (with apologies to Ernie - older readers will remember).

Gordon Street will always live on with me and many others. After all Gordon Street can claim to have “the loveliest chapel in Methodism,” which is a masterpiece of Clonmel architect William Tinsley who, although regarded perhaps as Ireland’s and most certainly Clonmel’s greatest architect, has still not had a street named after him.

I also happened upon a booklet by F.W. Boland entitled “The Lost Years.” This booklet was printed by “The Clonmel Chronicle” (the predecessor of ‘The Nationalist’) and is a narrative of the experiences of an ordinary soldier from the time he joined the First World War in 1915 up to his return home in June 1919. Does anybody know who F.W. Boland was?

Inserted within the booklet is a list of old Clonmel people (some with a sobriquet) - John Bull, Hannah The Duck, Mary from Heaven, Bunker Robinson, Tommy Bluebird, Johnny Buckets, Scorchie McGrath, Puss Woods, The Brass Castle, Curley Wee, Gussie Goose, The Drooping Lily. I recall all the people on this list, some more clearly than others. I wonder if any of your readers know anything about these characters.

Perhaps Margaret Rossiter remembers and will enlighten us.

And because of her ways being starched and staid

As years went by she got more afraid

Of her chances growing fewer.

Most of the neighbourhood streets she knew

On the shelf, by the amber Suir.

Another old maid precise and neat

And once of late when they chanced to meet,

For they couldn’t exist apart,

For advice on a matter ‘til now concealed

And in strictest confidence revealed

The secret of her heart.

With many a giggle and pout she told her friend

That she knew she was growing old

And that ere her heart became too cold

She wished to name the happy day

To settle herself in life and say

The words love, honour and obey

In short, to change her name.

Though ‘tis said by the shock she was quite unnerved

And hinted she thought she had not deserved,

At least not to her knowledge,

To be left alone in advancing years

But despite her sisterly prayers and tears

To have taken the name of College.