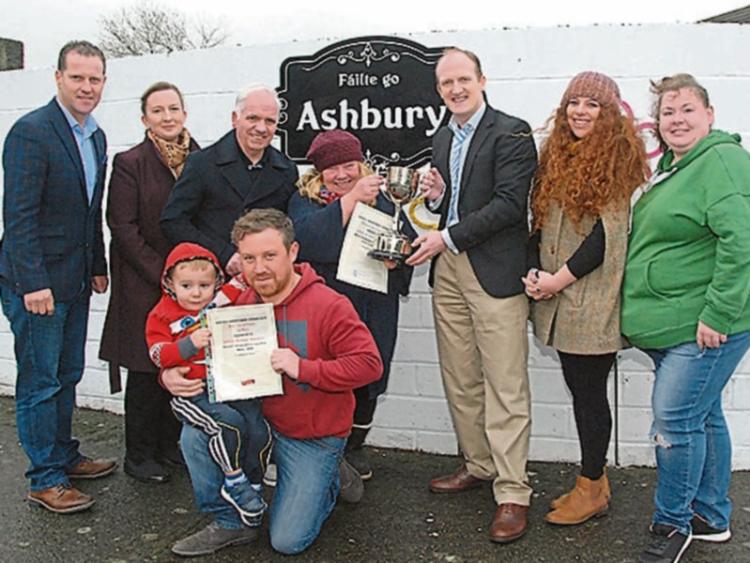 The presentation of the much anticipated 2018 Roscrea Enhancement Committee Awards took place shortly before Christmas.

This year a number of additional awards were added to what has become a very significant initiative for the town.

Chairman of the committee, Brian King congratulated all the winners and in particular acknowledged the overall winner Ashbury who took the coveted cup sponsored by Roscrea Credit Union

Brian had a special mention for Sheehane and Assumption Park. It was Sheehane’s second time to enter the competition and to finish second in 2017 and once again in 2018 is a remarkable achievement they could be proud of.

Assumption Park finished in fourth place in 2017 and improved on that position to finish 3rd in 2018 which was also a great achievement.

The overall winner of the 2018 Roscrea Enhancement Awards was Ashbury who deserve great credit.

Brian King said that not only did Ashbury win the best overall prize they also won the award for Best Entrance to an estate which gives an indication of the level of work completed by the Ashbury residents.

Brian again called on even more local resident committees and businesses to get behind the Tidy Towns effort. This year the Enhancement Committee once again engaged a judge who is very specialised in the whole area of enhancement and landscape design.

The judging takes place in late summer and early autumn and those who entered were assessed under various criteria such as litter control, biodiversity, community and youth involvement, tidiness/cleanliness of the estate, vibrancy, innovation, use of the Irish language, community voluntary efforts including fundraising and sustainability and conservation of resources.

The full results are as follows:

Best entrance to an estate: