More than 200 people have, so far, signed petition condemning the Council's action 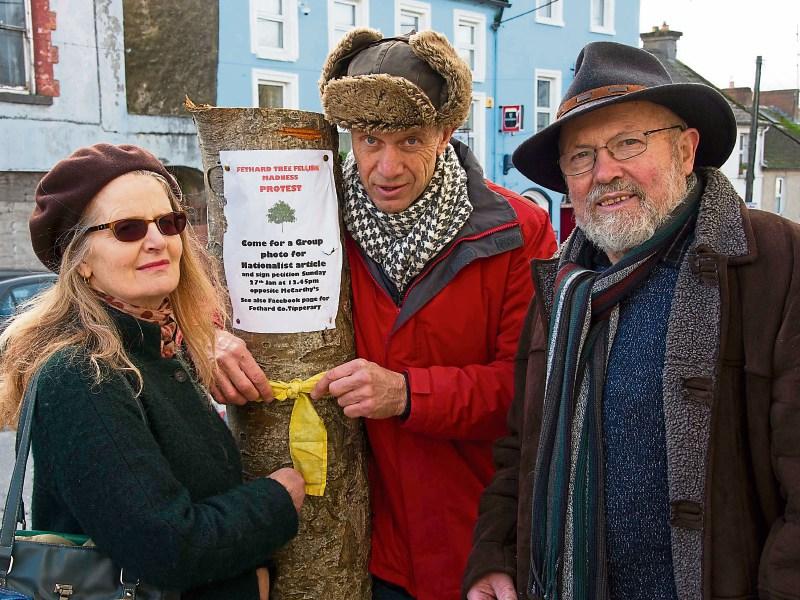 Theresia Guschlbauer, Alan Moore and Richard Auler tying a yellow ribbon on the stump of one of the trees cut down on Fethard's Main Street

Around 200 angry residents gathered in Fethard on Sunday to protest at the felling of broadleaf trees by Tipperary Co. Council on the town's Main Street and Bourke Street last week.

The protest on Main Street was organised jointly by Fethard Community Council, Fethard Tidy Towns and Fethard Historical Society and more than 200 people have so far signed a petition opposing the Council's action.

Tipperary Co. Council has issued a statement outlining that it was necessary to remove five tress on Bourke Street and four trees on Main Street as part of the Council's footpath renewal works to remove "trip hazards" and to ensure footpaths are safe to use.

The Council pointed out that the condition of the footpaths on Bourke Street, for example, has caused accidents, one of which resulted in serious injuries.

The local authority stressed that the trees that have been removed will be replaced by younger trees selected for an urban setting and planted in a manner and location that will prevent a recurrence of the damage to footpaths, which were causing a trip hazard.

He argued that alternative measures should have been pursued if there was any issue with pavement lifting now or in the future.

"What kind of society are we living in if the insurance industry is calling the shots to the detriment of our environment and the public realm," he asked.

Mr Moore told The Nationalist more than 200 people signed the petition, which is  in Kenny's Centra in Fethard,  to date and the number of signatures was growing.  The petition condemns the felling of the trees, calls for replanting and that no further felling of trees in the town take place in the future without prior public consultation.

"We plan to present the petition to the Council and we will be looking for a meeting with senior representatives to find out what happened, make sure it doesn't happen again and to look at a replanting programme," he added.

The protest was also addressed by fellow Fethard Historical Society member Mary Hanrahan, who deplored the Council's decision to fell the trees.

She reminded the protesters of the efforts of local people over many years to make Fethard a more attractive place to live and lamented how quickly this has now been damaged.

Theresia Guschlbauer spoke about the value of trees in terms of their beauty, contribution to biodiversity and in mitigating climate change. She claimed that pruning, pollarding and disease treatment would all be carried ot in other countries rather than felling if there were problems identified.

Meanwhile, Ballingarry FF Cllr Imelda Goldsboro acknowledged the public distress at the cutting of the trees and told the protest she had contacted the senior council engineer responsible who gave an undertaking that all the trees will be replaced with suitable species.

Meanwhile, the Council's statement explained that  was necessary to remove the nine trees in Bourke St. and Main St because the growth of their roots due to their species has continued to damage the footpaths despite previous repair works undertaken.

It outlined that the Council was investing a total of €30,000 on the footpath renewal programme in Fethard.

The Council  said it  does not carry out formal consultation on projects of this scale as it is essentially a series of small footpath maintenance works at various locations in the town. The statement added that "informal contact" had taken place with some residents.