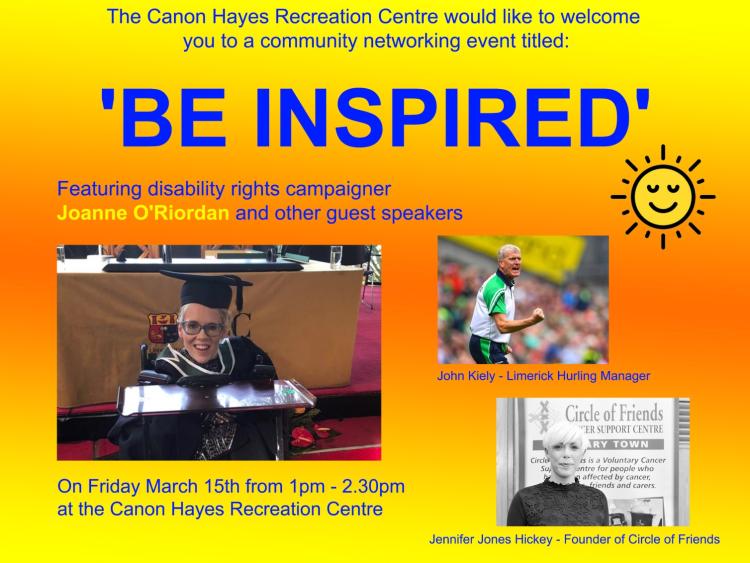 Disability rights campaigner, Joanne O'Riordan, No Limbs No Limits, will be the keynote speaker at an event titled 'Be Inspired' , in Canon Hayes Recreation Centre in Tipperary on Friday, March 15

Disability rights campaigner, Joanne O'Riordan, No Limbs No Limits, will be the keynote speaker at an event titled 'Be Inspired' which is being hosted by the Canon Hayes Recreation Centre in Tipperary Town on Friday next, March 15th from 1pm to 2.30pm.

22-year-old Joanne O’Riordan is the holder of a Criminology Degree from UCC and is only one of seven people in the world living with a rare physical disability known as Total Amelia.

This means she was born without all four limbs and even though there is no medical explanation as to why this happened, Joanne or indeed her family has never allowed it to hold her back.
She has used technology to enhance her abilities in both her education and through the wider social environment.

She has conquered enormous challenges at home, in school and around her local community and has spoken at the United Nations in New York City, giving an address on the use of technology and challenging those present to build a robot for her to use, for which she received a standing ovation.

Joanne attracted a lot of media attention in 2011 when she challenged the Government and the then Taoiseach Enda Kenny on cuts to disability allowance. She was chosen as Young Person of the Year in the People of the Year Awards in 2012 and was the youngest ever Grand Marshall at Dublin's St Patrick's Festival parade in 2016.

Her brother Steven made a film of her life, titled No Limbs No Limits, a story of how human resilience can conquer all by overcoming many obstacles to achieve what others would deem impossible.

Chair of the Canon Hayes Recreation Centre, Martin Quinn says that they are delighted to welcome Joanne to the Centre and to Tipperary Town. "We all need inspiration in our lives and Joanne is an example to all able bodied and disabled bodies to live very happy, independent, fulfilled lives. The challenges that she faces get bigger and far greater to overcome everyday and I am very much looking forward to hearing her story and how she was inspired to challenge issues around disability and to bring these to national and world prominence".

The Canon Hayes Recreation Centre provides sporting and recreation facilities for Tipperary Town and hinterlands. Opened in 1987 the Centre boasts a wide range of indoor and outdoor facilities along with the provision of childcare facilities.

Along with hearing from the inspirational Joanne O'Riordan we will hear from John Kiely about inspiring a team to reach the 'holy grail' of hurling and capture the Liam McCarthy Cup and from Jennifer Jones Hickey on overcoming personal health struggles to inspire a community to provide a state of the art cancer support centre. These are inspirational stories and should be heard by everyone".

The event will run from 1pm to 2.30pm and will also feature support stands and information from local organisations and providers. Tea/Coffee will be served and entry is free and open to everyone.