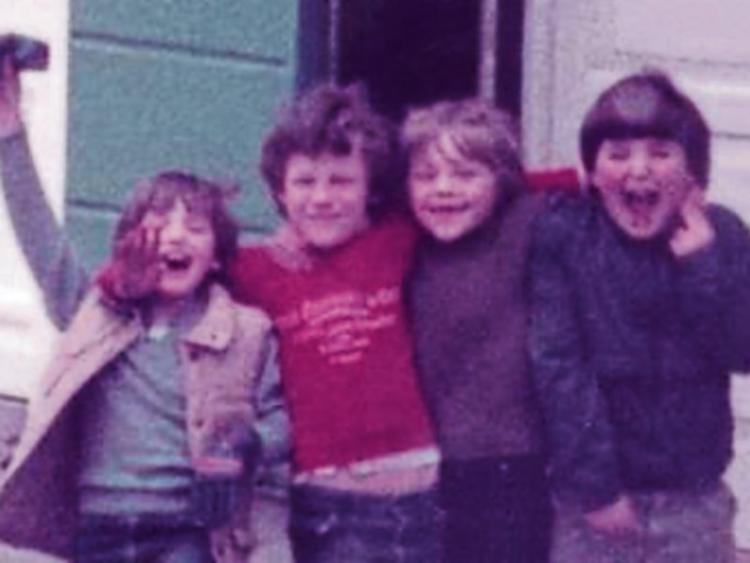 Separated by more than 3,000 miles for 35 years, four men from Cashel have been located by an American tourist who took their photo on Main Street in Cashel in 1984.

Pamela Clare Charlesworth from Buffalo, New York was visiting Ireland on a school trip when she took the picture.

In the decades since then she said that she often thought about the boys, who were aged between 8 and 11 at the time.

Wondering what became of them, she sent out an appeal for information on Facebook on St. Patrick's Day.

It soon emerged that the photo of first cousins TJ McInerny, Gary McInerny and Thomas J McInerny and their friend Mikey Cummins wasn't taken in Cork, as Pamela Clare Charlesworth had always understood to be the case, but on Main Street in Cashel.

"I had never seen the photo and I got a shock when I saw it online. It's incredible" says TJ McInerny, who has since spoken to Ms. Charlesworth on the phone.

"My father Thomas McInerny senior had a shop in Main Street", he explained. "Tour buses, usually with American tourists, used to pull up outside and come in to buy European electricity adaptors, so from a young age I was used to talking to Americans", he says.

In a post on Facebook, Pamela Clare Charlesworth said she was "truly amazed and overwhelmed by the outpouring of support, hope and help in response to my little post and photo. It has been so heartwarming and wonderful.The boys have been located, with a bit of an unexpected twist!"

Thanking everyone for their spirit and encouragement, she said "I am so grateful to everyone who reached out to me in messages, who shared my post and took a sincere interest".

Explaining the background to the photo, she says "on a fairly empty street I happened upon these four Irish boys who wanted to know if I was from the United States and if I would chat with them so they could hear my American accent. They were curious, sweet, gregarious, a little mischievous and chock full of cuteness!

"They begged me numerous times to take their picture, and when I finally did this is how they posed. How adorable is that? The photo completely captures how I remember their personalities and I am so glad I took it and still have it in my possession", she added, while pledging to return to Ireland and meet the men in the not-too-distant future.

TJ McInerny now lives with his wife Nicola and children Megan and Max in Mullinahone. For the last 20 years he has run TJ Macs pub, which was established by his late father Thomas McInerny, who passed away four years ago.

He says that several American tourists, who stay in Killaghy Castle in Mullinahone, have visited the pub over the years, and that he has a special affinity with Americans.

They include celebrity chef Rick Moonen from Las Vegas, with whom he is still in contact.

Of the other men in the photo, meanwhile, Thomas J McInerny is now living in Edinburgh, while Gary McInerny and Mikey Cummins are still in Cashel.