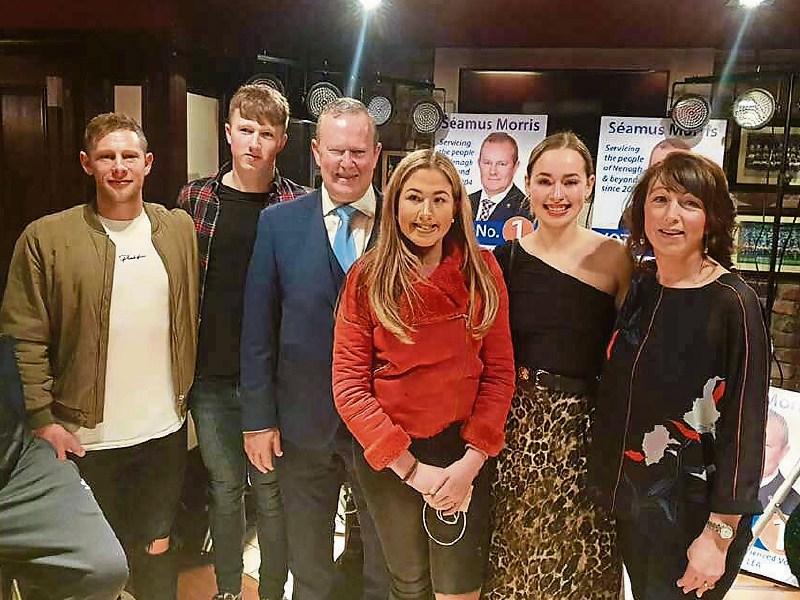 Cllr Seamus Morris, Independent, with his wife, Denise, and family at the launch of his local election campaign in Nenagh

Independent councillor Seamus Morris has warned that Nenagh could be left with just one council representative due to the nature of the make up of the district in the upcoming local elections.

Nenagh district currently has nine councillors, but that will drop to just five after the May 24 elections.

“This election poses the possibility that in such a rural five-seater that only one of those seats was available for a Nenagh-based councillor. With six Nenagh-based candidates in the field already, it is hugely important to maximise the Nenagh vote,” he said.

The former Sinn Fein member, who left the party following a row in 2017, spoke briefly at his campaign launch last Saturday about how he had considered walking away from politics but his family and friends helped him regain his strength and he was looking forward to this campaign with renewed energy.

He said that he was proud to have served as Mayor of Nenagh in 2004 in his first year of being elected to Nenagh Town Council.

Cllr Morris said that he was the only elected representative who had consistently held the HSE management of University Hospital Limerick to account over the “disgraceful overcrowding” in the emergency department .

He was also the only public representative who had stood against the proposal to pump 330 million litres of water through some of the best agricultural land in North Tipperary to pipes in Dublin.

Cllr Morris said that he had used his networking skills and experience to set up the Premier Hurling Experience, a tourism project showcasing the skills of hurling and hurley making to over 50 American and Canadian high school rugby teams, of which quite a number of them had stayed for up to three nights in the town .

He was delighted to announce that as part of the Nenagh 800 celebrations in 2020 he had made contact with a tour operator to bring two American high school rugby teams to play for the Nenagh 800 trophy .