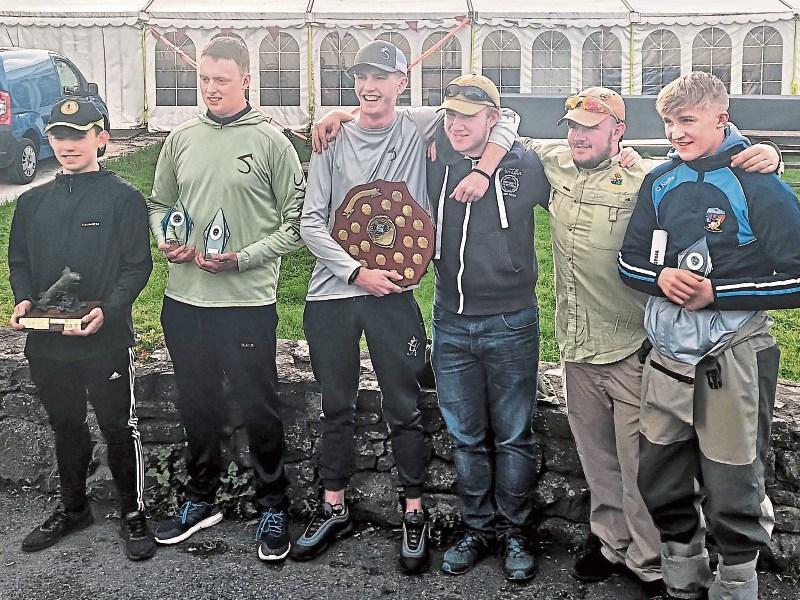 Congratulations to Fethard and Killusty angler Robert Hackett, who became 2018 All Ireland River juvenile fly-fishing champion on March 31, 2019 (postponed at end of last year), competing on the Clare river in Tuam County Galway. Congratulations also to Conor Cagney who was placed fourth in this competition, also representing Fethard and Killusty Anglers. Robert and Conor have both now qualified to represent Ireland, to fish the Youth World Fly Fishing Championships in    Czech Republic in August 2019.

This competition was fished on a catch and release basis with barbless hooks.  Each trout is carefully measured and scored if over 18cm and then safely returned to the river.  The fishing was tough on the day of the competition due to dirty water from the heavy rain the day before.  The juveniles were challenged to use several methods within the flyfishing discipline to catch during these conditions. Munster also won the provincial title with seven anglers representing the province.

Fethard and Killusty Anglers Annual Competition takes place this coming Sunday, April 21, meeting at Thorney Bridge at 10am.  We ask all members not to fish the club waters for the two days before the competition to give every angler an equal chance on the day.  All are welcome to join the club on that morning, or at any time by contacting Colm Hackett (086 8397868) or Seán Maher (085 7050580). New Senior and Juvenile members are always welcome, and we will endeavour to help in any way we can.

Thanks to those that helped with river bank cleaning on the 10th March on the river Clashawley, every little bit helps each year.  Remember to please respect the landowner’s property when you go fishing on our wonderful club waters.  Please pick up any litter you may find and bring it home, and always respect fencing and livestock whenever you are on the river.  Fethard and Killusty Anglers club is only possible with the kind permission of the landowners so please respect this every time you venture out.  Tight lines for 2019 as there has already been some good fishing due to the mild winter, so get out there and enjoy your time by the Anner and Clashawley.  The Gods do not deduct from man’s/woman’s allotted span, the hours spent in flyfishing.