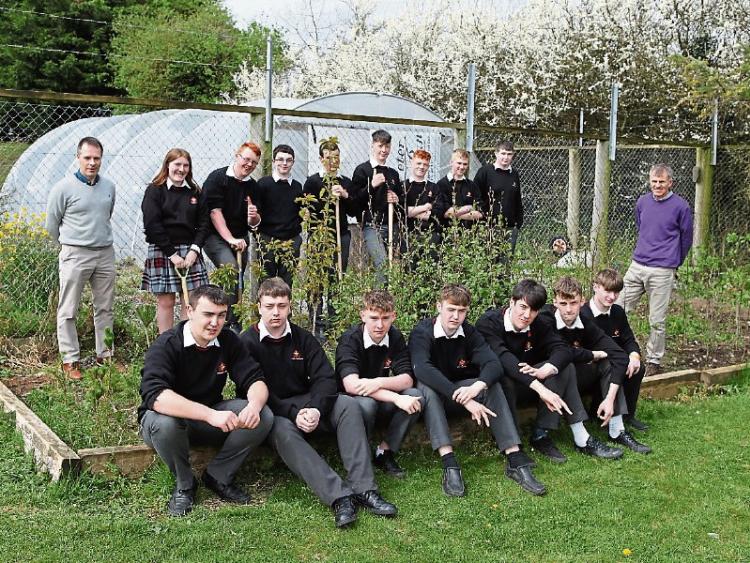 The nursery now has 150 saplings of mainly native species of birch, rowan, alder and scots pine. This project is a joint initiative between Coláiste Phobal’s green schools committee and Roscrea tidy towns.

The saplings mature for two years before final planting. This initiative will form part of the school’s green flag application on the theme of biodiversity.

The Coláiste concert to raise funds for Pieta House went very well and students performed to an extremely high standard and did themselves, their families and the school proud.

Our thanks must go to Rev. Jane for the use of the church free of charge, Colm Wright for providing sound and lighting free of charge last but by no means least the students for giving of their time and talents freely.

We are delighted to support Pieta House and the funds raised will be kept in Roscrea to help those who need it most.

Congratulations to Mr. O’Mara’s second year CSPE class who organised a very successful bake sale in aid of Ngara Primary school in Uganda. They raised €180 for a great cause. Well done to all involved.

Coláiste Phobal’s school fundraiser for this year is The Chaser.

It was launched on Friday, April 12, in the school gym. It promises to be a wonderful night of entertainment on Friday, May 17, in Racket Hall Hotel. It will help to raise much needed funds for the school and is certainly a novel event that is sure to attract the interest of many.

Some of our second year students left on Thursday morning, April 11, for their London trip accompanied by a number of teachers.

They returned late on Saturday, April 13, having enjoyed the sights immensely. Thanks goes to Ms Quirke and Mr Fitzgerald for organising the trip.

Three Transition Year students, Shane Whyte, Rebecca Reid, and Ciara Kavanagh, left on Thursday April 11, accompanied by Mr Newman for Shanghai as part of a scholarship they received through the Confucius Institute in UCC.

They will be there for the two weeks of Easter.

On Tuesday, April 9, the TYs went on the adventure journey to Glendalough, where both the distance and the terrain took a step on from the practice. A misty start to the hike, but as wereached the top of the walk the mist had lifted and students were able to take in the beautiful landscape that they were walking through. That evening some students had their first ever cooking experience when they prepared meals for themselves. Over the next day the students took part in high ropes, bushcraft, and orienteering.