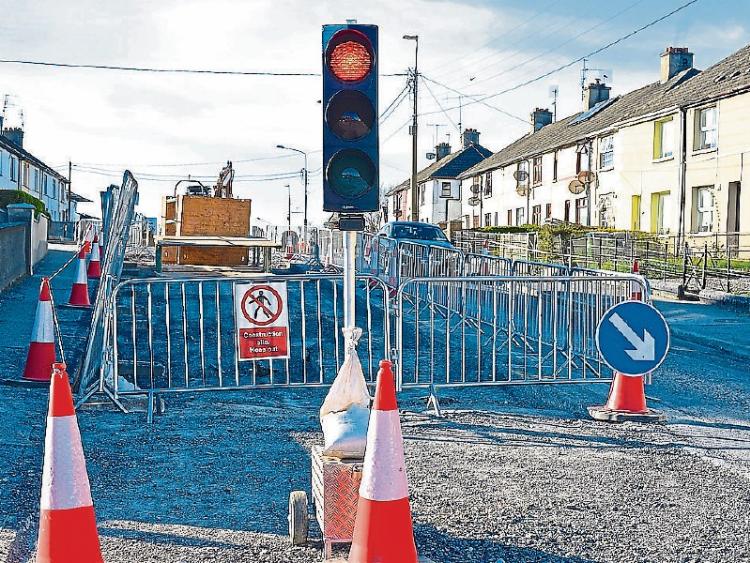 The roadworks have disrupted traffic in the town for months, and led to a decrease in footfall to some businesses.

However, a lot of businesses have made “positive comments” on the lengthy roadworks, Ms Farrell told councillors. A section from the Amber garage to Tesco will be completed in the next week or so, while Tesco to Amber on the other side of the street will be completed by the end of May.

Another section from a roundabout to Amber will be 90 per cent completed by June. It’s proposed to have a one-way system in place to keep traffic moving.

Cllr Martin Browne said the “vast majority” of people understand the work has to be done. “Louise coming to the meetings with residents is very much appreciated,” and there has been a “marked improvement” in relations between the contractor and residents.

Cllr Browne said it’s hoped they will keep the public informed over the next eight to 12 months of work.

Cllr Mary Hanna Hourigan said she was delighted that Ms Farrell had “talked to business people at the coalface.”

Ms Farrell said the contract does not allow for night work to be carried out as the area is marked residential/commercial, and “the noise would travel down that street.”

Cllr John Crosse said that the new senior engineer Paddy Crowley, “had been thrown in at the deep end.” There had been a “lot of information thrown out there,” but people are starting to come around. “Commercial businesses have got it in the neck there, and there’s a lot less footfall. We have to do everything in our power to regain that footfall.” Cllr Crosse called for the public to be kept informed.

Cllr Roger Kennedy said local people now realise why the road is so bad, “because there was no foundation to it.” “It’s important to keep constant communication.” The elected members need to sit down with the developer staff and assess the proper impact. Footfall is noticeably down on that street in the town”. Business people need to be helped “back on their feet so as to kick-start a new era for Tipperary town,” added Cllr Kennedy.

Cllr Michael Fitzgerald said that, “no matter who sits around this table in June,” they all have to work positively, and “take lessons from what has happened, and move on, to make Tipperary a better place”.

District director for Cashel/Tipperary municipal district Claire Curley stressed that Tipperary town is “very much open for business,” and not many other towns have over 150 free car parking spaces, and the amenities Tipperary town has.