Jon Stewart’s replacement marks his first night behind the desk with some groan-worthy jokes and an awful interview, saved by flashes of inspiration 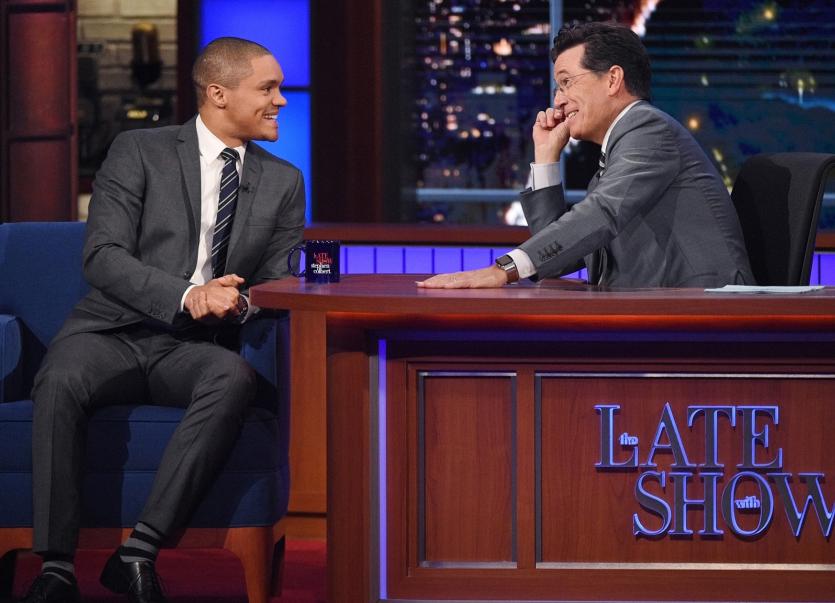 he Daily Show aired on Monday for the first time since 1999 without the much-loved Jon Stewart as its permanent host. There was something surreal about hearing the same announcer and hummable theme music – so familiar to millions of fans around the world – but then a new face on a redesigned set. This will take some getting used to, like looking in the mirror fresh after a haircut.

Trevor Noah has kicked off his tenure, six months after his appointment as the show’s next host was announced. His best jokes were at the top of the show when he introduced himself to America and thanked both Stewart and viewers. “This is as strange for you as it is for me,” he said, breaking the ice, and likened Jon Stewart to a kind of political father. “Dad left and now it feels like the family has a new stepdad, and he’s black.”

Trevor Noah's Daily Show: what he needs to do to succeed
Read more
These were the great jokes Noah and his team have probably been writing for months. In another the South African comedian said a number of Americans had been asked to be the new host but had turned the offer down. “A job that Americans have rejected is once again being done by an immigrant,” he said.

But the segments in which Noah broached current news events, always where Stewart shone brightest, too often failed to hit their mark. Yes, Noah mined some clever material from the Pope’s US visit and Speaker of the House John Boehner’s resignation, but there were more than a few clunkers. Especially bad was a joke about the pope “undercompensating” by driving a small car. “I’m saying the pope has a huge cock,” Noah had to explain.

And then there was an absolute groaner about Boehner being the bouncer at “club Congress” which is a boring club because “everyone has AIDS”, explaining his pun on “aides”. Having to elucidate two punchlines in rapid succession, even if that is part of the joke, just seems a bit sloppy.

Noah rebounded alongside correspondents Jordan Klepper and newbie Roy Wood Jr. Klepper discussed who might replace Boehner and it became a double entendre about who would be capable to replace Stewart. Klepper, of course, was convinced no one would be good enough to replace John/Jon. A little self-referential and possibly beating many critics to the punch, sure, but on the first night it’s excusable, especially because it was so well orchestrated.

A chat with Wood about life on Mars and who might be the first black man on the red planet was even more amusing, mostly because Wood found a way to really carry the segment and make it his own, ultimately fulfilling a correspondent’s function. Noah, like Stewart before him, made a great straight man and let his co-worker garner all of the best laughs.

But the final segment was a toothless and unironic interview with the comedian Kevin Hart, who has never had a virtue he hasn’t vociferously extolled. It started when Hart brought out a box of ties as a gift for Noah, who reacted with as much joy as, well, a man receiving a box of ties would. His questions for Hart were such softballs that they may as well have been made out of cotton candy, inflated with helium, and let loose on a spring breeze. We got to hear about Hart’s mammoth tour, work as an action star, and how he is absolutely obsessed with running. Hart even took a moment to congratulate himself on how well spoken he sounded.