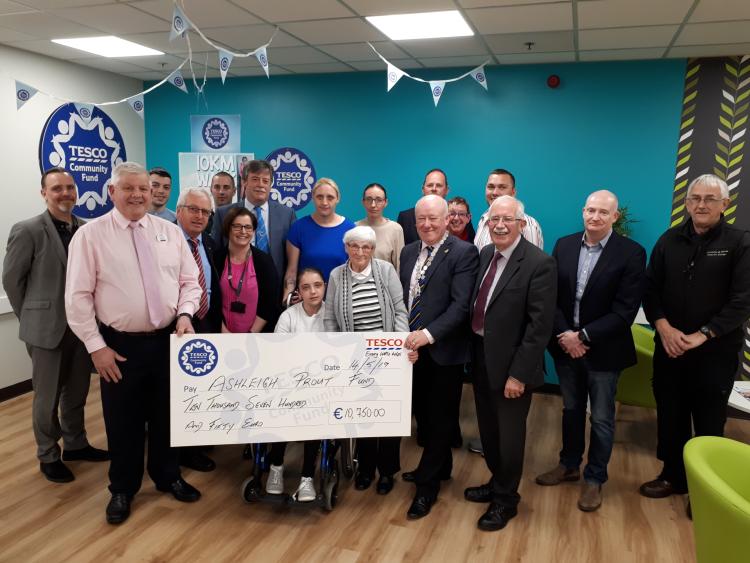 A fundraising walk to support a Tipperary girl set to undergo spinal surgery has raised €10,750.

The 11-year-old has double curvature of the spine and a totally deformed back, confining her to a wheelchair as she struggles to walk. She was in sixth class at St Oliver’s National School when she suffered a stroke last October, which led to brain damage and severe Tourette syndrome.

A 10km fundraising walk took place in Cahir last month, raising €10,750 which will go towards keeping the family afloat.

Ashleigh was presented with the cheque at Tesco Clonmel on May 14 by store manager Martin Allen, whose organisational skills were instrumental to the walk’s success, and Mayor of Clonmel Borough District Cllr Richie Molloy. “It’s amazing what the community can achieve when it pulls together,” Mr Allen told the gathering which included Ashleigh’s family, Tesco Clonmel staff, local representatives along with staff from Eishtec Clonmel and the Society of St Vincent de Paul.

Mr Allen said Ashleigh’s blue token appeal is currently taking place at Tesco stores in Clonmel, Tipperary Town and Thurles. “I hope the funds being raised will help Ashleigh and ease the family’s burden,” he added.

Mayor Molloy said the town of Cahir was “buzzing with activity” the day of the walk. “It’s very hard to raise funds and it’s incredible that €10,750 was raised in such a short space of time,” he praised.

Eishtec Clonmel also raised €650 for Ashleigh as part of the fundraiser. As part of Eishtec’s casual dress at work for the summer initiative, the entire team wore red for Ashleigh. Head of site Shane Foley said Eishtec was delighted to support such a worthy cause, highlighting that Ashleigh’s uncle, Martin, is a team member at the centre.

Society of St Vincent de Paul’s Clonmel store manager Chris Butler said the organisation was also proud to help the family in their time of need. “It was great to see the community come together and lend a helping hand to Ashleigh and her family,” he added.

The final word of the day went to Ashleigh, whose smile lit up the room when she was presented with the proceeds of the fundraiser. She enjoyed taking part in the walk, expressing gratitude to everyone who has supported her ahead of surgery.