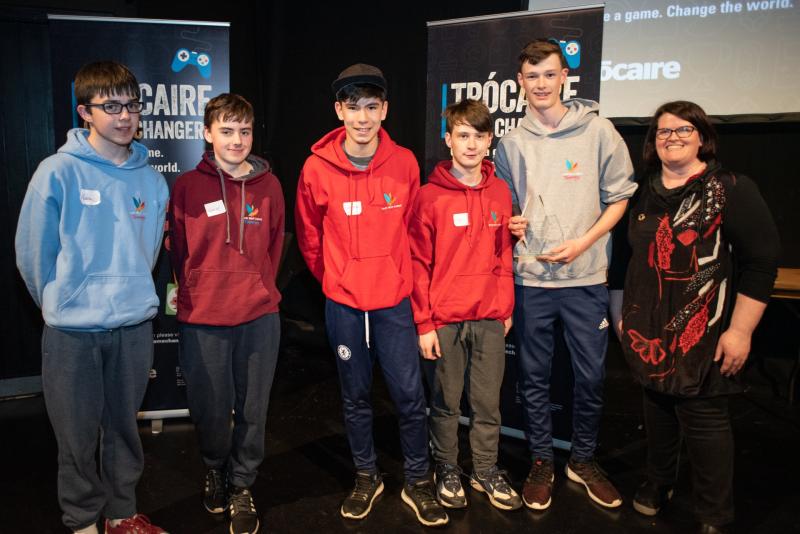 Young people from across Ireland were trying out the games of fellow finalists at the event, exploring issues such as human rights, the hazardous journeys of refugees and the challenges of delivering aid to countries affected by poverty.

Trócaire Game Changers is a competition for young people who want to change the world and believe games are a way to do this. On this first year of Game Changers, over 80 games were entered into the competition from Primary and Post-Primary schools, and Youth groups.

The group from Cashel Neighbourhood youth project won the Youth Category of the competition. The winning team included locals Jonathan Ryan, Conor Sheridan, Aaron Gibson, Tom Laffey and David O’Dwyer who were recognised for their game ‘SDGs and me.’

Some 22 games made it through to the final, and the Trócaire judges were blown away by the quality and creativity of the games. The final prize winners on the day were chosen by the other finalists themselves. Every group got to play all the other games and then voted on their favourites.

At the event, Trócaire CEO Caoimhe de Barra told all the finalists not to underestimate the power that young people have. "You have power – never forget that," she said, adding that "You have a voice, you have rights, you can create change. The biggest changes happen when people work together.”

Caoimhe raised the Climate School Strikes in Ireland as a great example of how young people can achieve change. "The Irish Government declared a Climate Emergency in the Dáil last Thursday," she said. "Do you think they would have done this without the Climate Strikes and young people raising their voices?

"We hope that the people who play your games will be inspired to think about the issues you are focusing on and that they will take action. They might ask their parents to raise issues about global justice with the election candidates when they come to your door for example. They might look at what they can do to reduce the impact of climate change or to help make the world a fairer place for all people.”

Caoimhe ended the day saying, "I warmly congratulate all of you – young people and educators - on your work and I want to thank you for putting your energy and passion behind these important issues of global justice that you are highlighting here today.”