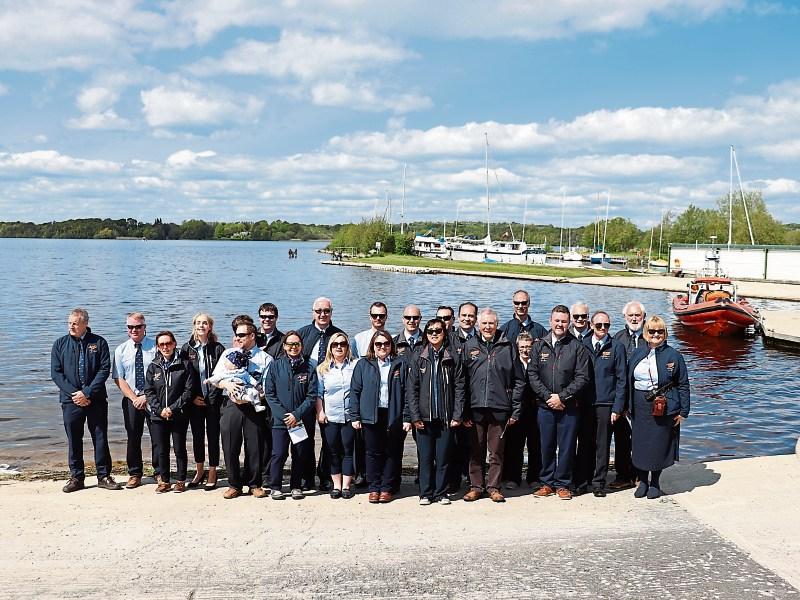 Saving lives on Lough Derg: volunteer crew members with Lough Derg RNLI at the handing over of the new lifeboat, the Jean Spier, to the station in Dromineer, and inset the Jean Spier goes through its

Boat users on Lough Derg will have their safety looked after by a new purpose-built inshore RNLI lifeboat thanks to the generosity of one family.

On a bright, warm and breezy May afternoon, Lough Derg RNLI took charge of its brand new boat, the Jean Spier, which was donated to the institute’s parent body by the Spier family.

The inshore Atlantic 85 B911 which carries Jean’s name, remembers a woman, who with her husband, Robert, have been active supporters of the RNLI for years.

Sadly Jean died in October 2017 and Robert dedicated the new boat in her honour.

The official handing over ceremony was held outside on the lawn of the Lough Derg Yacht Club in Dromineer and attended by members of the Lough RNLI, as well as the Irish Coast Guard and the local community.

Mr Spier said that he was delighted to hand over the boat to the RNLI and into the care of Paddy McLaughlin, an RNLI Irish Council member and coxwain of Red Bay lifeboat station.

Mr McLaughlin thanked Robert, saying: “There is no greater gift that we can receive, no act of generosity more appreciated by the volunteers than the bequest of a lifesaving vessel.” Lough Derg lifeboat operations manager, Liam Maloney accepted the lifeboat on behalf of volunteer crew, expressing his thanks to Robert and Jean.

“This means we now have the latest and finest rescue equipment available,” he said.

On behalf of station personnel at Lough Derg RNLI, volunteers Aoife Kennedy, administrative officer, and Ger Egan, lifeboat mechanic and helm presented Robert with a Lough Derg jacket with the Jean Spier crest and welcomed him as an honorary member of the lifeboat team.

Following the ceremony, fundraising committee member and former deputy launching authority Teddy Knight took guests out on the lake in his boat, the Ku-Ee-Tu, to watch a demonstration of the new lifeboat in action.

The Jean Spier replaces Lough Derg RNLI’s original inshore lifeboat which had been in use since the station opened 10 years ago.

Lough Derg RNLI has answered seven callouts in the past month.