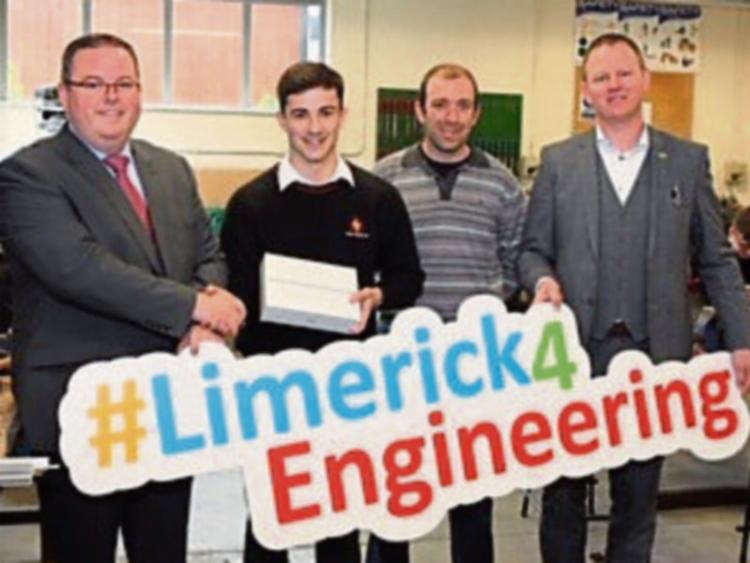 The fifth highly successful showcase attracted over 1,500 people from schools across the region.

Over 30 students attended from Roscrea with their engineering teachers.

The showcase featured interactive stands from almost 50 leading companies based in the Mid-West region to highlight careers and educational and training routes to pursuing a rewarding, exciting career in engineering.

Congratulations to Adam from all at the Limerick for engineering consortium.

Thursday, May 9, saw the boys from Coláiste compete in the East Munster Schools Track and Field Championships in the impressive surroundings of the RSC arena in Waterford. All athletes competed to the very best of their ability challenging themselves against extremely stiff regional competition.

The assembled crowds in the stands were treated to an exhibition of running, jumping and throwing by the athletes from minor through to senior.

Adam Dooley led the charge, leaping to gold in the senior triple jump and silver in the long jump in what will be his last East Munster Schools competition.

Our junior athletes were unlucky not to medal but our juniors Graham Dooley and Michael Fitzgerald came first and second in the long jump, each recording personal bests in the process.

Both were also part of a silver winning 4 x 100m relay team along with Christopher Moloney and Killian Bergin. Killian also threw incredibly well to record a well-deserved silver medal in the javelin. Intermediate athlete Kyle Dooley won his 200m final at a canter and also helped his teammates John Donovan, Oisín Moloney and Jamie Ryan to bronze in the 4 x 100m final.