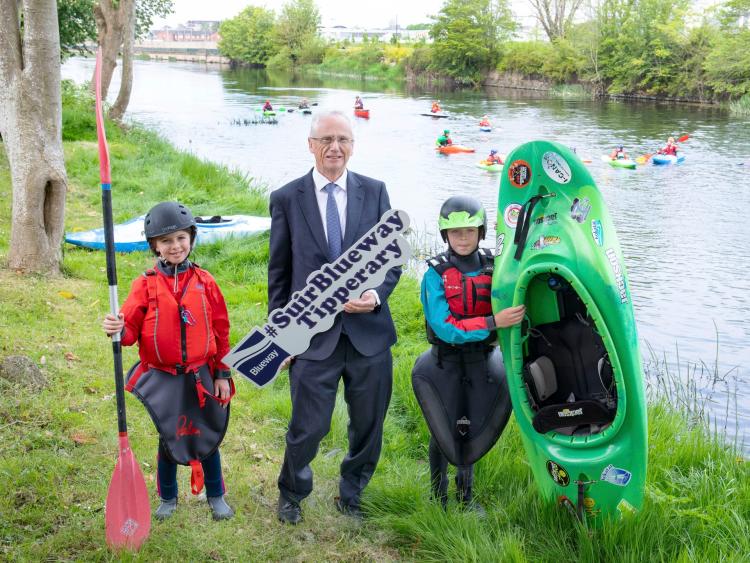 Mr Treacy described counties Tipperary and Waterford as the “most beautiful part of the country”, underlining that Suir Blueway is “absolutely huge” for the area. Visitors can experience guided tours of Cahir Castle before strolling or paddling down to the romantic Swiss Cottage. Suir Blueway continues through the Ardfinnan and Newcastle, as the River Suir meanders to Clonmel. Walkers, cyclists, canoeists, kayakers and paddle boarders can enjoy the beautiful scenery as they follow the river for 21 kilometres along the refurbished historic towpath from the Monument car park in Clonmel to Sean Healy Park in Carrick-on-Suir.

Accomplished paddlers can take on the challenge of the 300-metre Canoe Slalom Course in Clonmel, which was constructed in 2016 as part of the investment in the project. The longest slalom course in Ireland offers a unique sporting and leisure opportunity for both local users and visitors, and is used by Canoeing Ireland as a training base for the Irish national squad.

Refurbished pathways and multiple new access points to make it easier to get onto the river have been created in several places along the route. These include at Inch Field in Cahir, Ardfinnan, Sandybanks at Marlfield, Suir Island and Denis Burke Park in Clonmel, Kilsheelan, and Sean Healy Park in Carrick-on-Suir. New Blueway map boards and signage has been developed and erected to guide and improve visitor experiences.

“It will increase tourism in Tipperary, and it will increase the physical activity of people living in Tipperary and Waterford. Nothing can compare to the sense of well-being you get from exercise. Get out on the Blueway, do a bit of exercise and increase your quality of life,” he added.

Mr Slattery then delivered an insightful presentation into the process of constructing Suir Blueway. He praised Deputy Alan Kelly for securing funding when he was minister, which kick-started planning, design and construction. He said Suir Blueway is “not perfect”, but that the council strives to secure more funding and make improvements each year.

“We will have to learn together how to use it. Naturally, if you have fly fishermen coming in from Germany or America, we have to be conscious of kayakers who will be coming down the river to meet them. That interaction has to be managed. Cyclists, walkers, children and the elderly all using the track at the same time is going to lead to behavioural challenges. We will be asking for the cooperation of people, and will be using signage and education to get the message across,” he said.

Locals celebrated the launch of Suir Blueway over the weekend by taking part in walks and festivities. Mr Slattery described the “rich experience” of Suir Blueway as simply “wonderful”. According to Waterways Ireland, he highlighted that almost one in five waterway users are overseas visitors, 49% are domestic and 34% are local visitors. He said approximately 158,433 have used Suir Blueway since last August. Attracting 5,000 overseas visitors into the area could generate over €700,000. More than 1,500 people have already taken part in a number of activities on the Suir Blueway route, including the National Canoe Slalom events and National Club Canoeing Championships, the PaddleUp Programme, the Suir Descent, kayaking camps, canoeing training and education courses, 10km walks, heritage walks, cycling tours from castle to castle, and triathlon events.

“For those who are used to doing a 100km/h on a racer or 40km across the mountain, this is a completely different experience. It’s about nature, the sound of the water, the interaction with people. It’s a much slower, easy-going pace of life and you could easily spend a couple of hours down there,” Mr Slattery smiled.