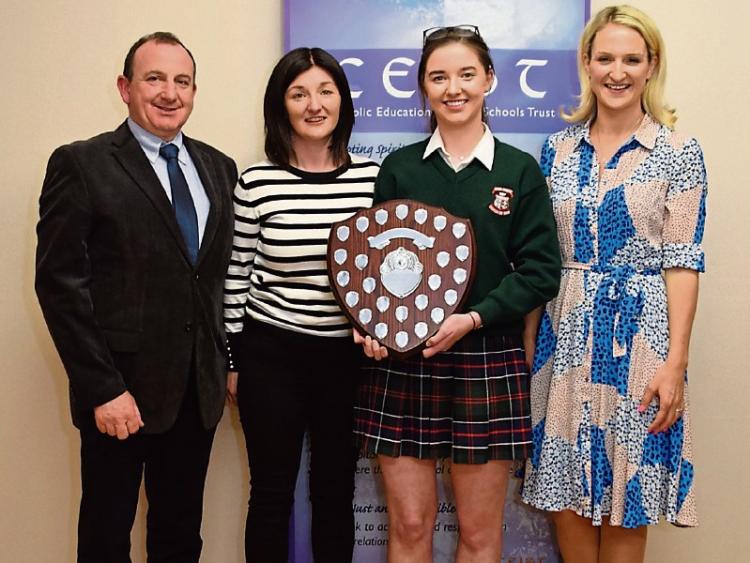 The award was presented to the Rathgormack student at the school’s annual awards ceremony on Thursday, May 16, which was addressed by special guest Minister of State for European Affairs Helen McEntee.

This ceremony is a focal point of the school calendar where pupils, parents and staff come together to recognise and celebrate the outstanding efforts and achievements of the students.

Principal Brendan O’Dwyer congratulated the girls on their achievements and urged them to continue to strive for excellence in all of their pursuits, academic or otherwise.

Mr. O’Dwyer also paid tribute to the whole school community, parents, teachers and ancillary staff and of course the students themselves for all that they do to make Scoil Mhuire such a wonderful place to teach and learn.

A large number of sports awards were presented to students for their outstanding contribution to various sports including: camogie, football, soccer, swimming, equestrian, athletics, badminton, with Angela McGuigan named as Sports Star of the Year.

Medals were also presented to students who completed the Gaisce programme.

The outstanding courage award was presented to Joyita Wootton by Catherine Foley from Carrick River Rescue for her quick thinking and heroic action in saving a woman from drowning last July.

The CEIST award was presented to Laura Power, the student who best reflects the spirit and core values of CEIST.

The ceremony culminated with the award for Overall Student of the Year.

This award consists of the perpetual trophy, the Catherine McCauley prize and the Mossy Casey Memorial Bursary, which was presented to Aisling Gough by Minister Helen McEntee, Mr. Brendan O’Dwyer and Mr. John Power from Carrick on Suir Credit Union.

Minister McEntee gave an inspiring address in which she encouraged the students of Scoil Mhuire to set their own goals and targets in life but in doing so urged the girls to support one another.

She advised that they would meet bumps along the road of life but to persevere and not to be afraid to seek help.

Ireland has changed a lot in twenty years and she welcomed the fact that “it’s ok not to be ok”.

She spoke of her work in the European Union and commended the Model UN Club where students assume the role of delegates representing countries and NGOs and debate issues of pressing global importance.

She then spoke about the key issue of climate change and the urgent need to act now.

She mentioned her recent visit to the Carribbean which is only too familiar with the ravages of global warming.  Acting now is essential for everyone and everything on this planet and young people must continue to lead the way.

The night concluded with light refreshments and an opportunity for parents, teachers and students to talk.