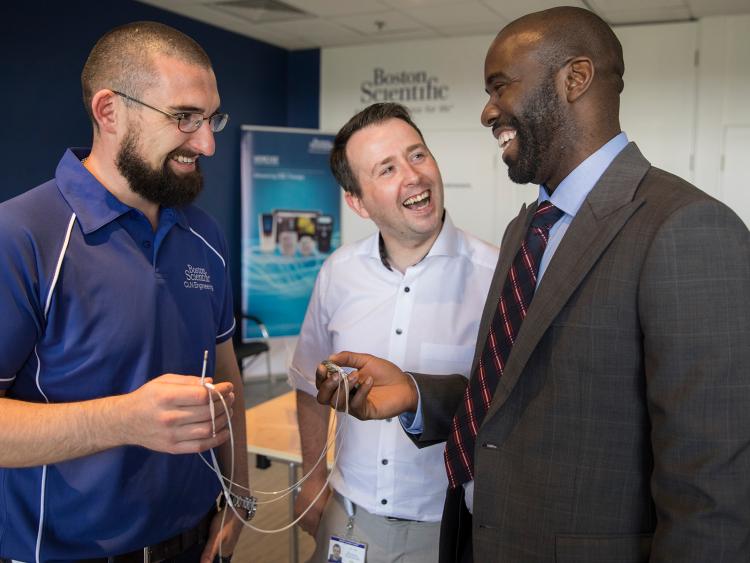 He was given a guided tour of the Clonmel site, which employs approximately 1,000 people from across the South East and beyond, before delivering a short speech to employees.

Muamba was forced to retire from football after suffering cardiac arrest during a FA Cup match between Bolton Wanderers and Tottenham Hotspur at White Hart Lane in 2012. The ordeal saw the then 23-year-old’s heart stop beating for 78 minutes.

A native of the Democratic Republic of the Congo, he had moved to England at the age of 11 and went on to play for England up until under 21 level.

Muamba has the Boston Scientific Clonmel-developed subcutaneous-implantable cardioverter defibrillator (S-ICD) system inserted in his body, providing protection against sudden cardiac death while avoiding risks and complications associated with transvenous leads. According to Boston Scientific, the evolutionary device particularly works well for younger people who have had a sudden cardiac arrest and are at risk of it happening again.

With an electrode placed under the skin, the S-ICD system delivers therapy without the need for wires implanted in the heart, leaving the heart and blood vessels untouched and intact. The battery usually lasts between five and nine years before it needs to be replaced.

Muamba paid tribute to the Boston Scientific Clonmel employees who worked on his device. He talked about how difficult it was when his dream of playing professional football came to an abrupt ending, but highlighted how grateful he is to still be alive and to be able to play with his kids.

“I had a lovely day at Boston Scientific Clonmel seeing all the hard work and how pacemakers and ICDs are made. I’m extremely thankful and grateful for these people and the work they do. The more devices are made, the more lives can be saved,” he said.