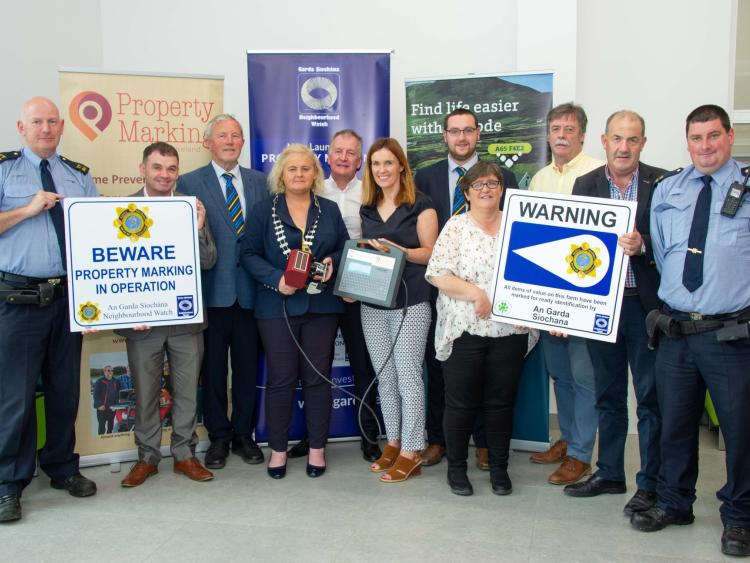 A community-led property marking machine programme for the Carrick-on-Suir Municipal District has been declared as a “significant step” towards reducing crime.

The technology works by engraving the property owner’s unique Eircode onto everything from construction equipment to computers and mobile phones.

It will be made available through community groups in the district, free of charge for up to five items. Tipperary County Council purchased the machine through the joint policing committee structure for approximately €5,000 from Killenaule-based Property Marking Ireland.

Endorsed by 12 local authorities nationwide, Cllr Roger Kennedy told a gathering at Carrick-on-Suir Town Hall that the machine will hammer the idea that property can be stolen and sold on. Cllr Kennedy, who was chair of the joint policing committee from 2014-2019, said it will be rolled out in the Carrick-on-Suir Municipal District and then in the other four municipal districts over the coming months for the public to use.

She highlighted: “Unfortunately, the impact of rural crime can be devastating for older people in our communities and vulnerable people living alone. Those people become increasingly isolated and afraid.”

“It certainly isn’t the answer to all rural theft, but it is a step towards safeguarding property, increasing security and supporting the gardaí in securing detections. The system should reduce overall crime,” she added.

Members of An Garda Síochána including chief superintendent Dominic Hayes, superintendent Willie Leahy and Carrick-on-Suir gardaí along with Tipperary councillors and council officials supported the launch. Among those was Sinn Féin’s Cllr David Dunne, who told TipperaryLive.ie that rural crime is a “big issue” and that there is a “major fear” within the elderly community living in Carrick-on-Suir. “We recently ran a petition to get more gardaí into the town and people came up to me and said they wouldn't sign the petition because they are afraid of what’s happening here,” he said.

Cllr Dunne emphasised the machine’s game- changing role in identifying retrieved lost or stolen property. “People can mark their lawnmowers and equipment using their Eircode. Gardaí recently had a warehouse full of equipment that couldn't be identified and given back. Two people could have the same size and model lawnmower with no identification mark on it, which can’t be returned because you can’t prove it’s yours,” he continued.

Cllr Dunne urged the public to report all property theft, regardless of the value of the items stolen. “This device is a double-edged sword - it will help get property back to owners and it will prevent criminals from stealing.

“We had our joint policing committee induction meeting today (June 28) and the gardaí said burglaries are down 60%, which is good. However, we know that there is a lot of crime out there that is not being reported to the gardaí. People might say ‘it’s only a lawnmower worth a €100’, but they need to report everything so gardaí can get a better grip on the statistics,” he added.

James O’Neill of Property Marking Ireland said the crime prevention property marking machine programme has been piloted over the last three years to great effect. “We started the pilot in West Cork, where property theft was a challenge, particularly boating equipment. It reduced crime dramatically once we started to mark the property and put up the signage. It was also piloted in Monaghan over an 18-month period, with the findings also showing a huge reduction in crime,” he explained.

Mr O’Neill, whose property marking machine invention has seen him shortlisted for a Social Entrepreneurs Ireland award programme worth €40,000, said the device will tackle the fear of crime and the costs associated as a result of it. “There has been a 38% increase in property theft in the construction industry over the last two years. 14,000 bicycles have also been stolen in the last two years, which is mainly an urban challenge in cities such as Cork, Dublin and Galway. College students have had their bicycles, laptops and mobile phones stolen. Theft has become a big challenge, especially with our ageing population. People are going through the rituals of checking doors and windows over and over again,” he said.

Construction businesses and farmers who use the property marking machine, which is currently based at Property Marking Ireland in Killenaule, will have to pay €2 per marking. “The money will go back into the community group that delivered the programme, so it will generate a small bit of revenue for them,” he added.