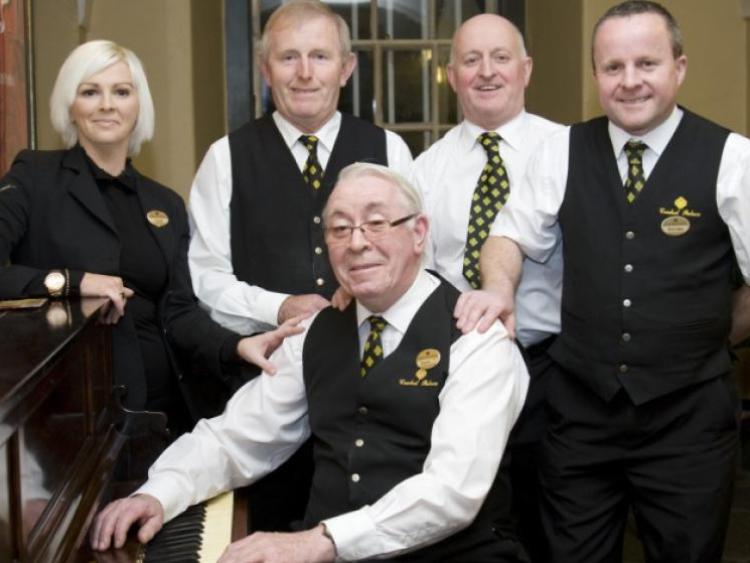 Dennis Heffernan, seated, pictured here on the occasion of his 70th birthday in 2013

Cashel has lost one of its great characters and storytellers this week with the passing of Denis Heffernan on Tuesday, July 9.

Denis served as head barman in the Guinness bar in the Cashel Palace Hotel until its closure in 2014, and with his rich baritone singing voice and legendary knowledge of all the stars, actors, presidents and princes who stayed there over the decades, came to be the life and soul of what he called ‘The House’.

Denis’ warmth and dedication touched many lives, said former Mayor of Cashel Dr Séan McCarthy, whose close friendship with Denis goes back in the 1960s, when the then Lord Brocket owned the Palace. Denis was passionate about horse racing, gaelic games, and “he really loved the town of Cashel.”

“He was a like a magnet for tourists,” said Dr McCarthy. “He epitomised what Ireland was really like for tourists. Many of them did come back, and the first person they’d always ask for when they came back to Cashel, was Denis. And if he was off-duty, they’d go up to the house to see him.”

“He knew all the horse trainers, jockeys and owners, and they had a particular affinity with him too. He had photographs with most of them.”

Denis’ passing leaves behind a vast repertoire of knowledge, anecdotes, songs, and stories unique to old Cashel, such as the full story behind the painting, Some Characters Seen at Cheltenham on Gold Cup Day by the English artist Waldron West, which hung in the Guinness Bar for many years.

“He was so proud of how Ballydoyle would do,” said Dr McCarthy. “He was very close to the late Vincent and Jacqueline O’Brien, and their families, and subsequently with John Magnier, the present owner of the Cashel Palace. He was looking forward to when the building would be completed.”

It’s understood the present owner of the Palace, John Magnier, has a copy of Denis’ dissertation on the Cheltenham painting, and the painting itself, which sold at auction in 2016 for €13,000.

Locals and visitors alike would marvel at Denis telling the story of how each character was posed in the painting, and listen with rapture as he sang one of his favourite ballads, Cashel My Hometown, recorded in the Cashel Palace in 2010.

“He was an institution,” says Dr McCarthy. “He also had a tremendous interest in the GAA, rugby, and the premier league in England.”

Reposing at Devitt’s Funeral Parlour this Thursday evening from 5.30pm with Removal at 7.30pm to St. John the Baptist Church, Cashel. Requiem Mass on Friday at 12 noon followed by Burial in Garranlea Cemetery.