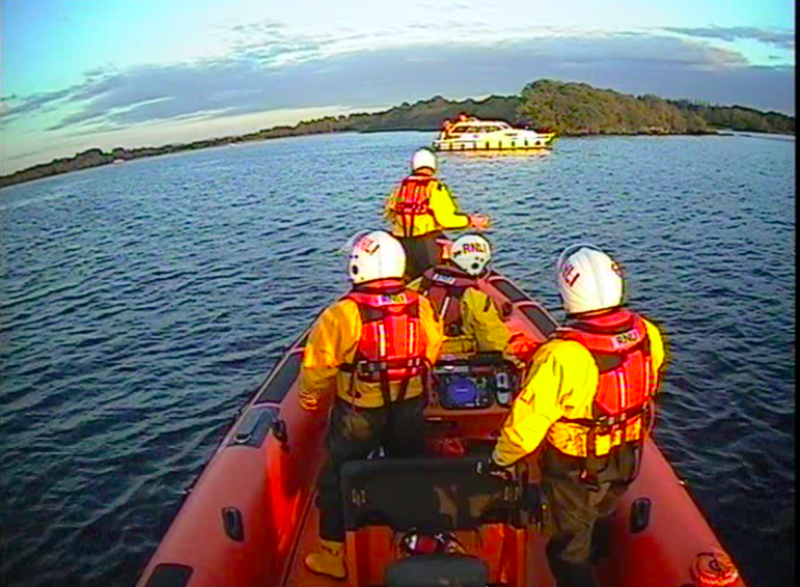 Lough Derg RNLI assisted six people - four adults and two children- on Sunday evening after their 35-foot cruiser ran aground near the Mountaineer buoy at Ryan's Point at around 9pm.

The lifeboat launched at 9.17pm with helm Eleanor Hooker, Dom Sharkey, Joe O’Donoghue and Chris Parker on board. The wind was easterly, Force 2 with good visibility.

Once the lifeboat rounded the Mountaineer buoy, a lifeboat crew member took soundings from the bow, whilst another checked depths on the navigation charts.

When the lifeboat came alongside, crew established that all people on board the casualty vessel were safe and unharmed and wearing their lifejackets. Two RNLI volunterers were transferred to the cruiser and, once satisfied that the vessel was not holed, set up for a tow.

The lifeboat took the vessel off the rocks and out into safe water, where an RNLI volunteer ensured that the drives, steering and rudder were in good working order. Once the cruiser was safely under way and making way to their next harbour, the lifeboat returned to station in Dromineer

Peter Kennedy, deputy launching authority at Lough Derg RNLI has advised boat users "to plan your passage and pay close attention to the navigational buoys that mark safe water on the lake".