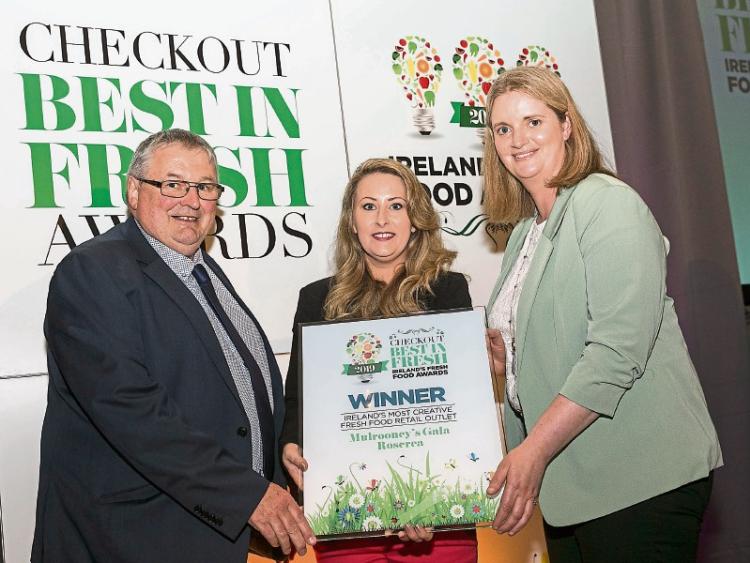 Mulrooney’s Gala in Roscrea has just been named Most Creative Fresh Food Retail Outlet at the prestigious Checkout Ireland Best in Fresh Awards 2019.

The Checkout Best in Fresh Awards, reward and promote excellence in fresh food retailing in Ireland, with retailers of all sizes and formats honoured.

Mulrooney’s Gala was recognised as a retailer that is truly creative in the presentation, range, sourcing, menu formulation, shopper engagement and creation of theatre within their fresh food department. In addition, it recognises the fresh product range and in-store concepts developed by Mulrooney’s Gala that has gained a strong following in both the local community and further afield.

Store owner, Sean Mulrooney, and Fresh Food Manager, Gwen Culbert, attended the event, and collected the award for Most Creative Fresh Food Retail Outlet at the awards, which took place at the InterContinental Hotel in Dublin.

CEO of Gala Retail, Gary Desmond said: “We have a strong network of Gala retailers throughout the country that are delivering excellence in fresh food retailing day in, day out. It’s no surprise that Mulrooney’s Gala was named as Most Creative Fresh Food Retail Outlet as the store’s fresh food offering is second to none, incorporating bakery, deli and hot food offerings for the people of Roscrea and surrounding areas. To be acknowledged for the high standard of the stores fresh food offering is a well-deserved honour.”

Mulrooneys’ Gala Roscrea is open from 7am – 11pm, seven days a week.